“I’ll remember this moment for the rest of my life. The unfathomable vastness of space. Its intricate beauty. This overwhelming feeling that human beings are not the only intelligent life in this amazing, mysterious universe.”

Those were the awestruck thoughts of my thirteen-year old self, as I lay in a meadow in the Swiss Alps on a warm summer night. I was there with two of my best friends, gazing up beyond the jagged silhouettes of the mountains, to the milky way, which stretched across the clearest night sky I had ever seen. We lay there in complete silence for about an hour, watching the stars multiply as our eyes adjusted to the darkness.

Ever since that experience, I’ve been enchanted by the night sky. I couldn’t wait to take off on our Australian adventure because I knew we’d see some spectacular outback skies, and we’d have the chance to photograph them. One of the first things I booked when we were planning our trip was a night time excursion to the “Field Of Light” art installation, which is on display this year near Uluru. The idea of being able to walk through meadows of coloured lights under a sparkling Uluru sky sounded magical to me, and it also seemed like it would be the perfect start to our outback adventure. And it was – we loved it. 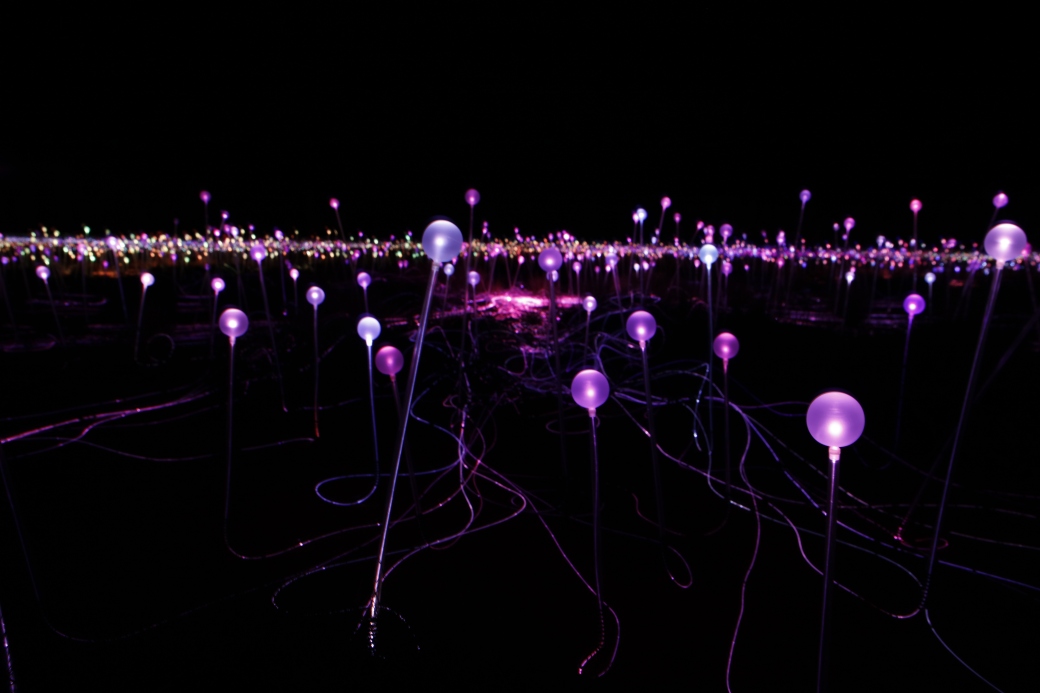 After that, we saw some incredible skies as we headed up through the red centre, but we were so busy we hardly had time to unpack our tripods. The cold, clear, moonless nights of King’s Canyon were some of the best we’ve ever seen, but it turns out that driving for hundreds of kilometres each day (our record was 1200 kilometres from Alice Springs to Mataranka) and then camping with two dogs in tow is quite challenging. It’s not quite the relaxing experience we’d imagined. And pitching a tent in the dark is seriously difficult! (Bailey! Where’s Bailey gone now? Here, you hold the tent up and start cooking dinner, while I search for Bailey and try to dry out the leaking roof bag…)

We were rushing everywhere because we had to make it up to (and then leave) Australia’s remote northwest Kimberley region before the arrival of “The Wet” – the tropical storms that leave entire communities marooned each year. Once we get there, we can slow down, we thought, and then we’ll be able to capture these magical nightscapes to our hearts’ content.

Well, that turned out to be a fantasy, too. Travelling in the Kimberley is like nothing else we’ve ever experienced. Every day, we were like kids at Disney World, overwhelmed by the adventures to be had, captivated by the strange and fascinating landscapes. We sped around, taking it all in, and then collapsed into bed early. 8pm is ‘Kimberley midnight’, one of the locals told us, and he was right.

The closest we got to setting up Al’s telescope was in the small town of Derby, which in the dry season is surrounded by endless, dusty mudflats that stretch out to the horizon. One night, after watching the sky clear following a lovely Kimberley sunset, we stayed up until the crazy hour of 10pm to do some star gazing. We packed all our kit into the car and drove a few kilometres out onto the mudflats, certain that our chance had finally arrived. But as soon as we’d set we set ourselves up, headlights started appearing from every direction, speeding straight towards us. It turned out that the Derby mudflats provide the only entertainment for the town’s bored hoons. It was scarier than it sounds, and we couldn’t get out of there fast enough. 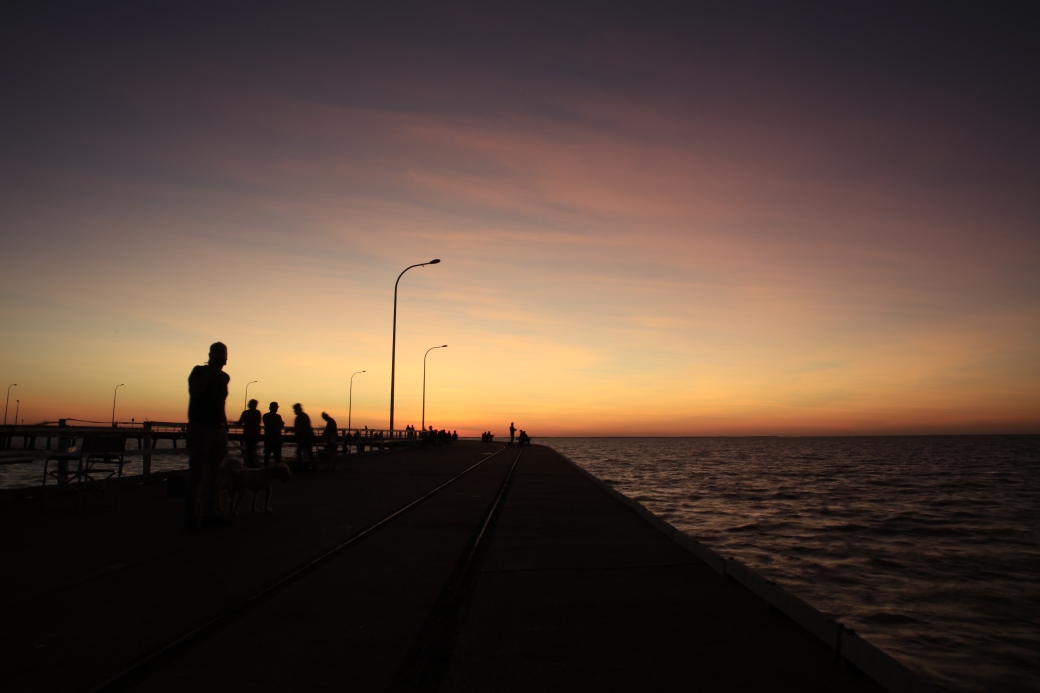 People gather every evening at Derby jetty to watch the sunset 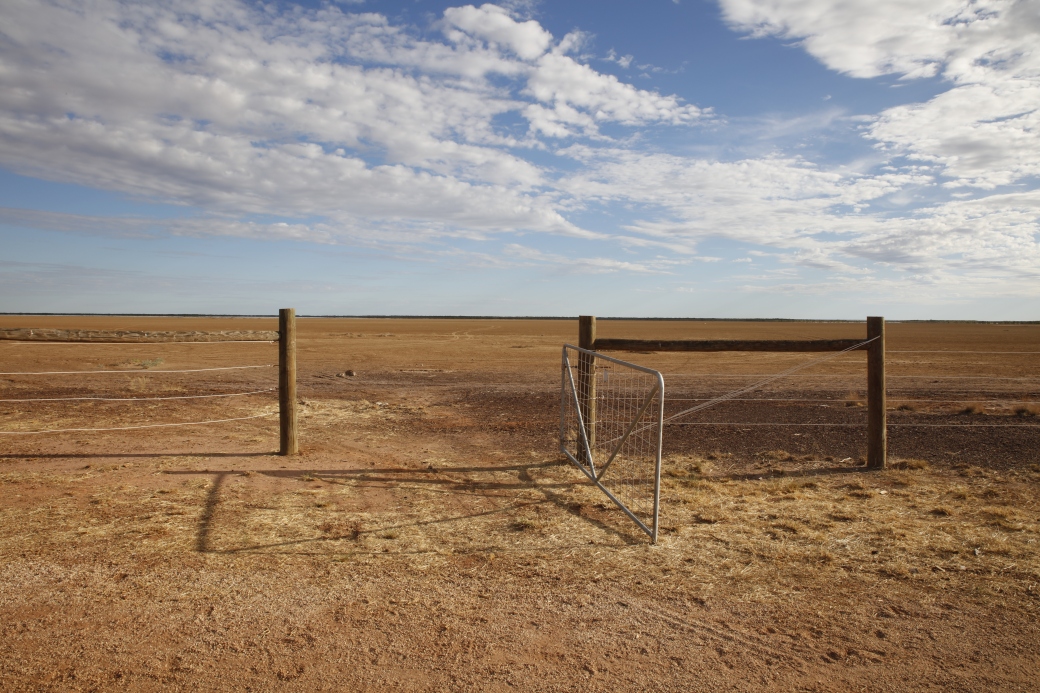 Derby’s mudflats stretch for miles and miles, and would be the prefect star-gazing spot if it wasn’t for the hoons racing their 4WDs across them at high speed!

After we left the Kimberley (we literally left the day of the first rain), we finally started to slow down. But the rain storms followed us across the Northern Territory and all the way over to Far North Queensland. Occasionally we caught a glimpse of a star in the gaps between the clouds, but we had to be careful not to blink. After weeks of drenchings in Cape Tribulation, Daintree and the Atherton Tablelands, we were beginning to wonder if we should have left Al’s telescope at home. 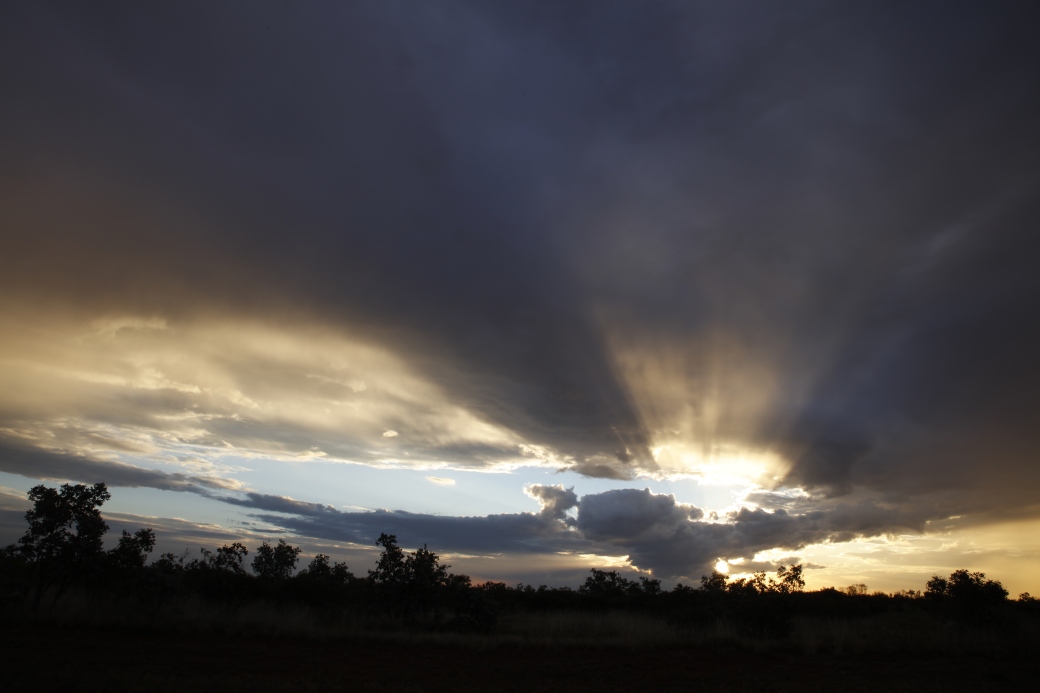 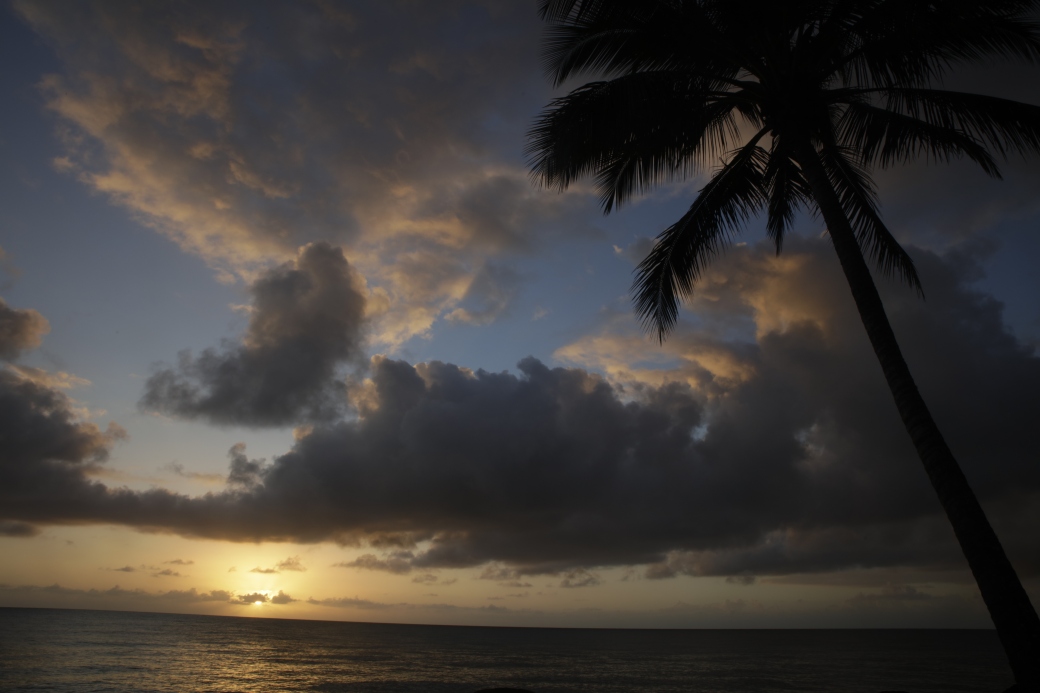 But then our luck changed. We’d booked a beach cottage for a week at a place called Flying Fish Point (which, ironically, we later found out is officially the wettest place in Australia), and the weather cleared. The full moon meant there was no point setting up the telescope, but each night we sat on the veranda, glass of wine in hand as we watched a huge pink moon rise over the sea. The house was literally beachfront (to the point that we were worried the waves would inundate the house at high tide) and it made for perfect moon-gazing. I photographed the moon’s changing colours, as it went from pink to orange and yellow, and then finally bright white, but my efforts didn’t capture the beauty of the scene. 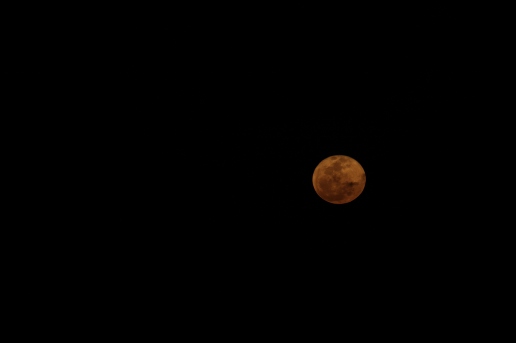 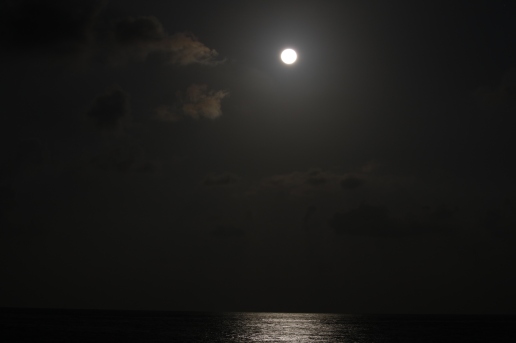 That week was a little taster of what was to come. As we headed out of the tropics and down the Queensland coast, we eventually arrived in the Whitsundays, home to some of Australia’s most exquisite beaches and famous sunsets. 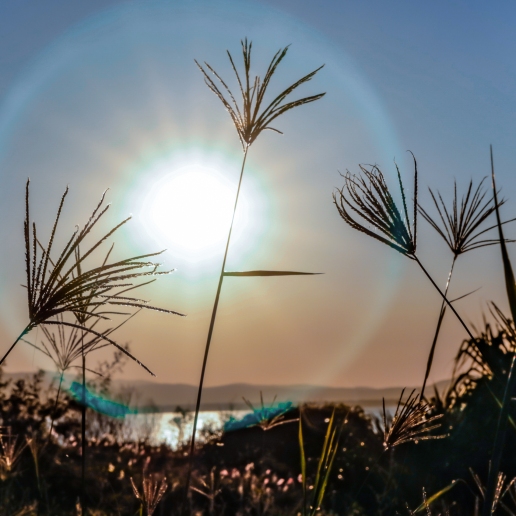 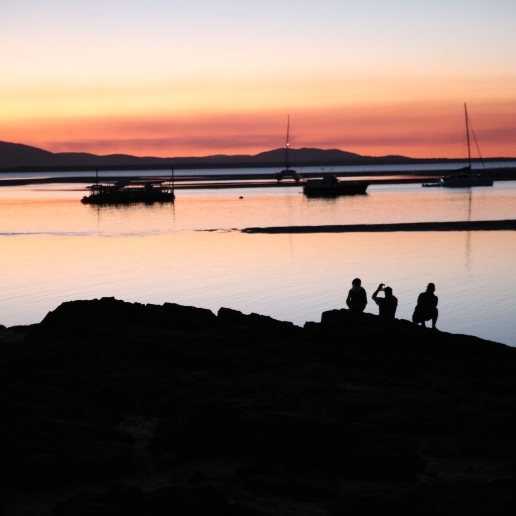 The dryer climate and moonless nights meant we could finally justify bringing Al’s telescope on our adventure. Every night put on the most amazing star show. One night we decided to make the most of it and headed out to a beautiful, remote beach called Hideaway Bay, purely to photograph the sky. We set up our tripods on a high flat rock that jutted out into the sea (out of reach of the salt water crocodiles), and photographed the night sky as the sea swept in around us. 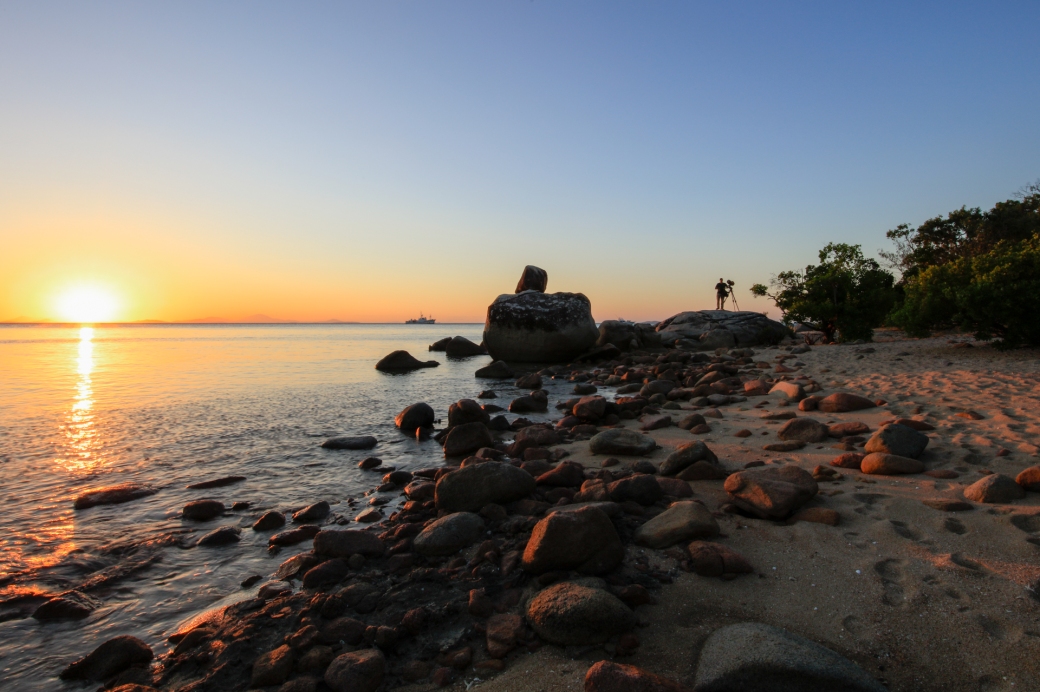 Al setting up his telescope at Hideaway Bay, north of Airlie Beach, Queensland

We had the bay to ourselves that night. The only lights apart from the sparkling milky way came from the distant sugar cane fires on the horizon and the port and starboard lights from a couple of boats anchored in the bay. And what a sky! It was worth the wait – my 47-year-old self was just as awestruck and thrilled as the 13 year old girl who gazed up at the starry summer night in the Alps.  It was one of those intense experiences that gets embedded in my memory for ever, which I know I’ll recall wherever I am in the world, as I gaze up at the stars. 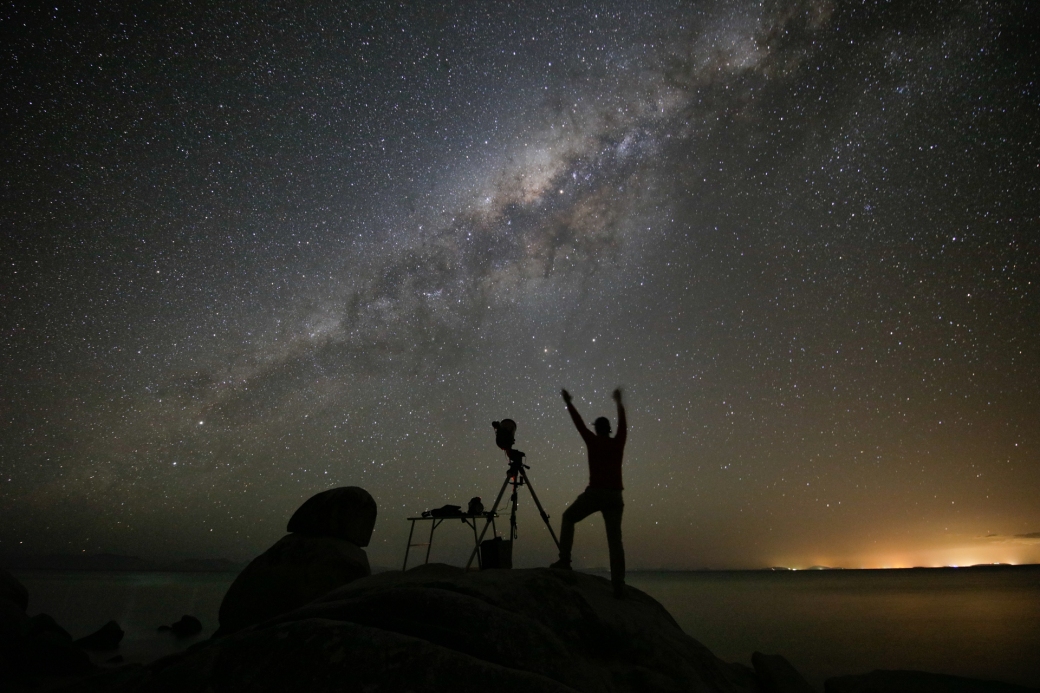 Al celebrating the night sky at Hideaway Bay, with the sugar cane fires burning on the horizon 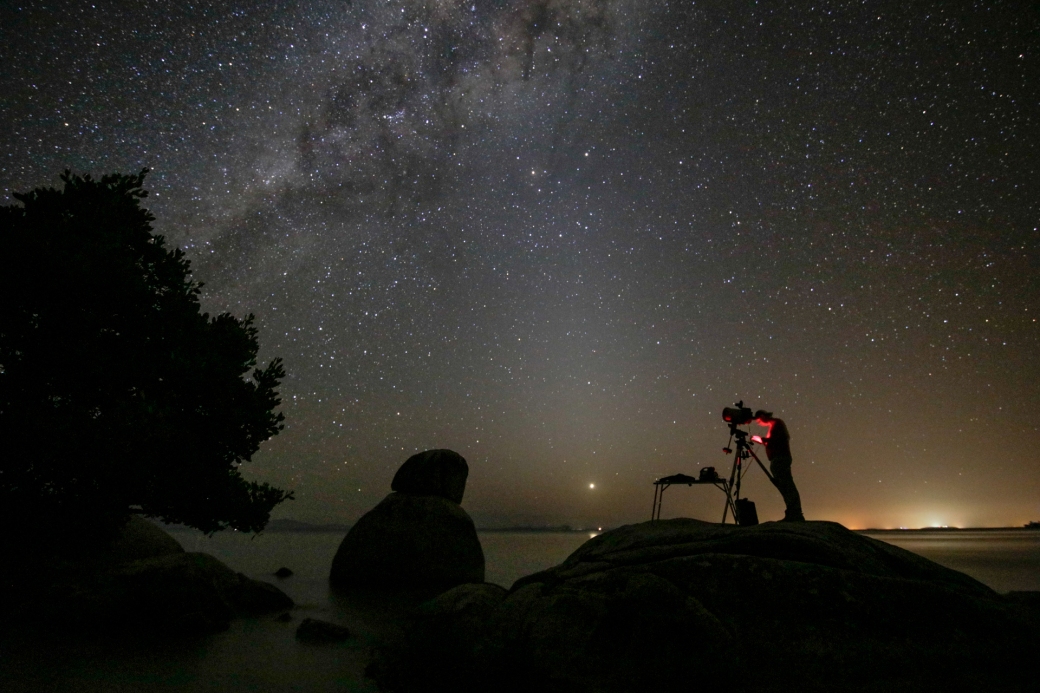 Al concentrating, trying to get the telescope to electronically track the planets at Hideaway Bay 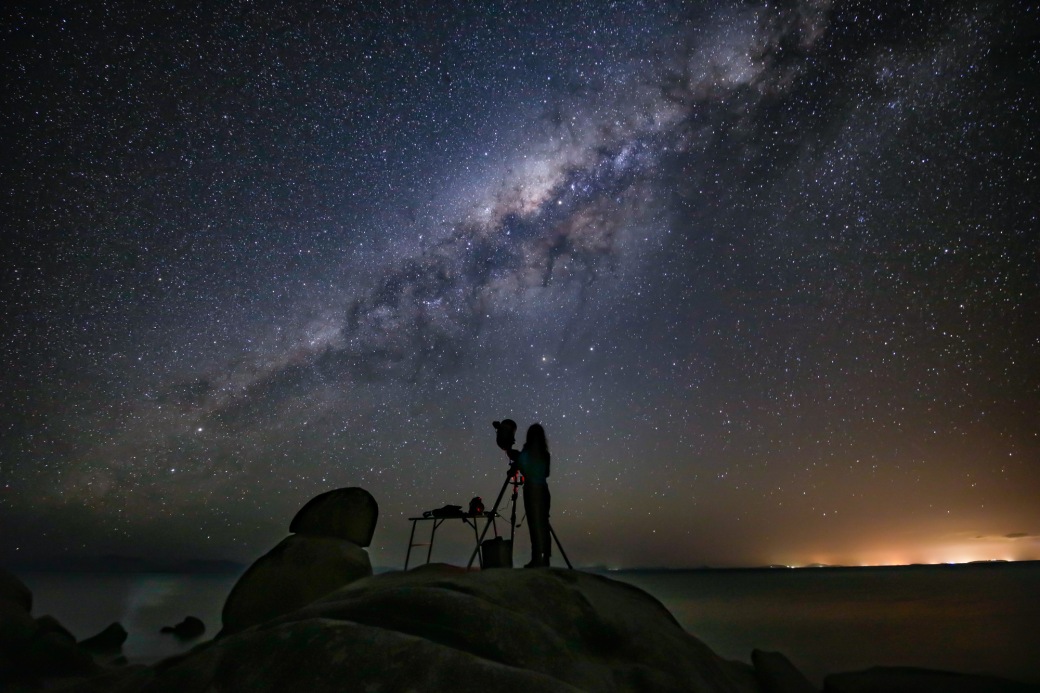 The milky way and me. True love

Since then, we’ve been spoiled with star- and moon-gazing opportunities, as you can see in the pictures below. And we’re looking forward to spending Al’s 50th birthday on a remote inland plateau in northern New South Wales, which is renowned for its dark skies. We can’t wait to get there – we’ll keep you posted on what we find. 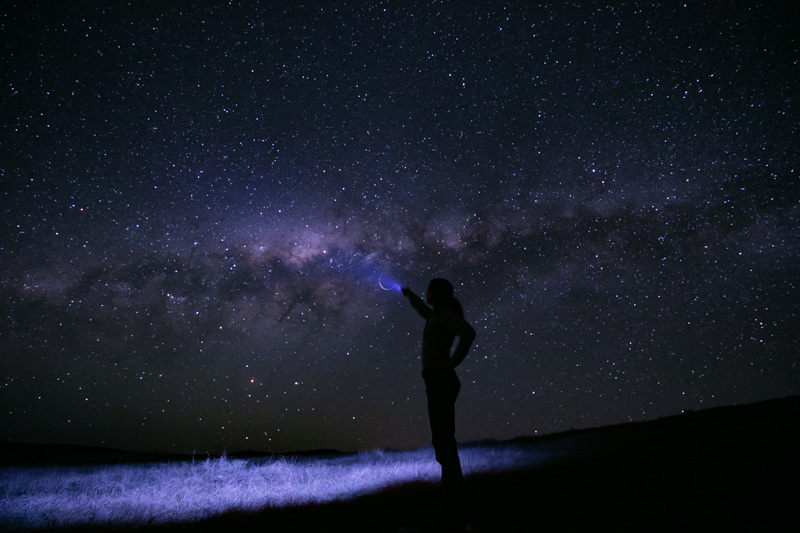 The beautiful night sky at Stanage Bay, where we camped for a few nights 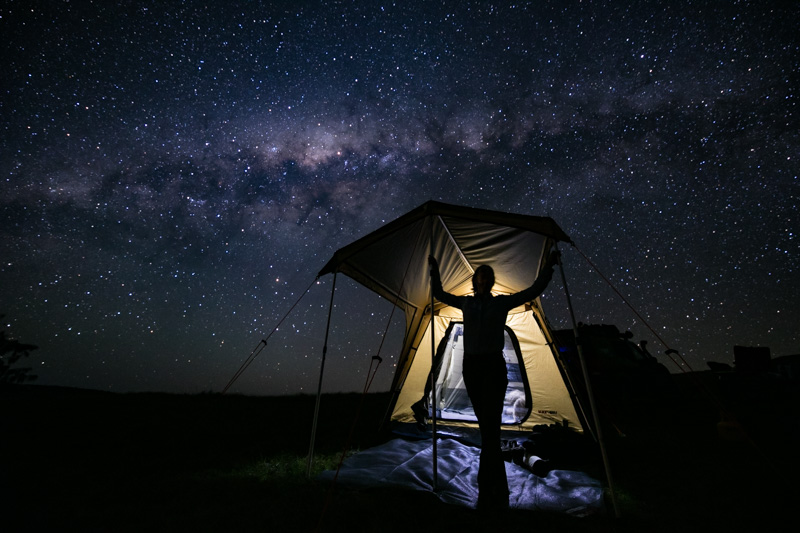 Our tent, which we pitched on the edge of a cliff, overlooking the ocean. It was pitch dark and a bit precarious! 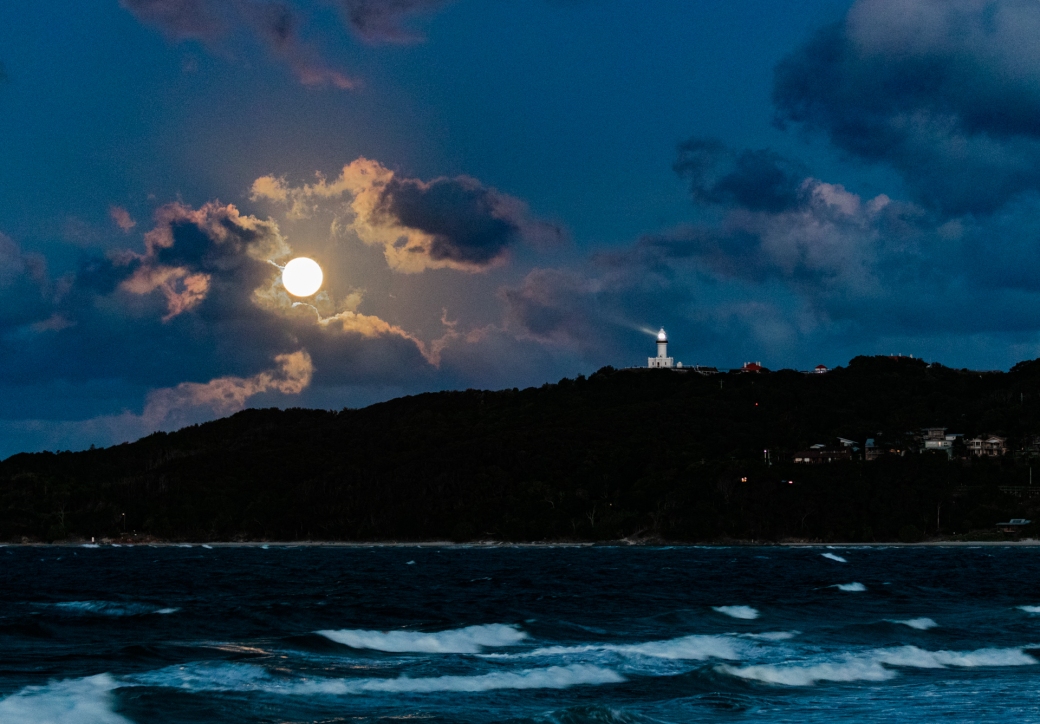 A few days ago, I photographed the full moon rising over Cape Byron Lighthouse at Byron Bay, Northern New South Wales. A storm was blowing in and the surf was crashing onto the beach.

2 thoughts on “Nightscapes of the Southern Sky”