You know the saying that you can wait ages for a bus, and then several come a long at once? Well, we’ve been hoping that also applies to flocks of Major Mitchell’s Cockatoos. We’ve travelled around Australia, searching our hearts out for nearly a year, hoping to photograph them. These are some of Australia’s most spectacular birds, and there’re supposed to be healthy populations in the interior of WA, where we’ve been for the past couple of months. But human development has forced them into a steep decline, and so these days you need a combination of local knowledge, patience and luck to see them.

Budgies, which we saw flocking in their hundreds at a waterhole south of Tennant Creek 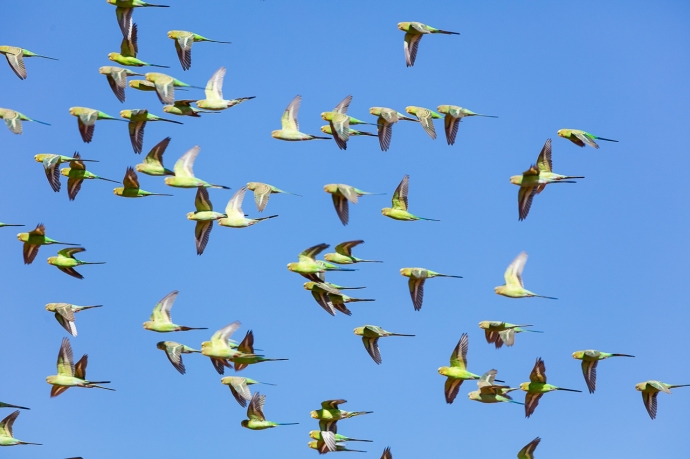 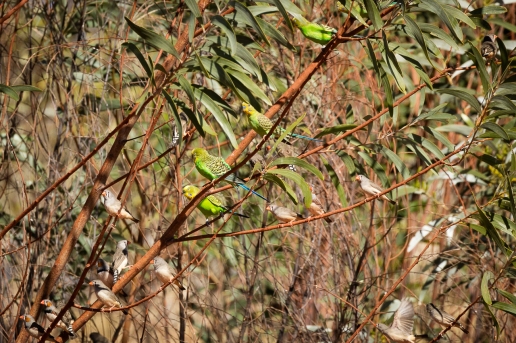 I confess we have had some amazing luck on this Aussie adventure of ours. We’ve seen things that we didn’t expect to see, met people we didn’t expect to meet, survived predicaments we didn’t expect to survive (I’m not exaggerating – you’ll understand when you read “The Scorching Skies Above Us, Part 4,” which we’ll publish at the end of our trip, once we’re home and dry). And so heading into the final leg of our trip, I’d been feeling rather irked that I didn’t have a single photograph of my favourite Australian bird. And this, despite looking for them in every conceivable place they could be – only to find yet more Corellas, Galahs, and every kind of Cockatoo except Major Mitchell’s.

Red-Tailed Black Cockatoos (photographed near Wyndham). Their tails are striped with red and yellow 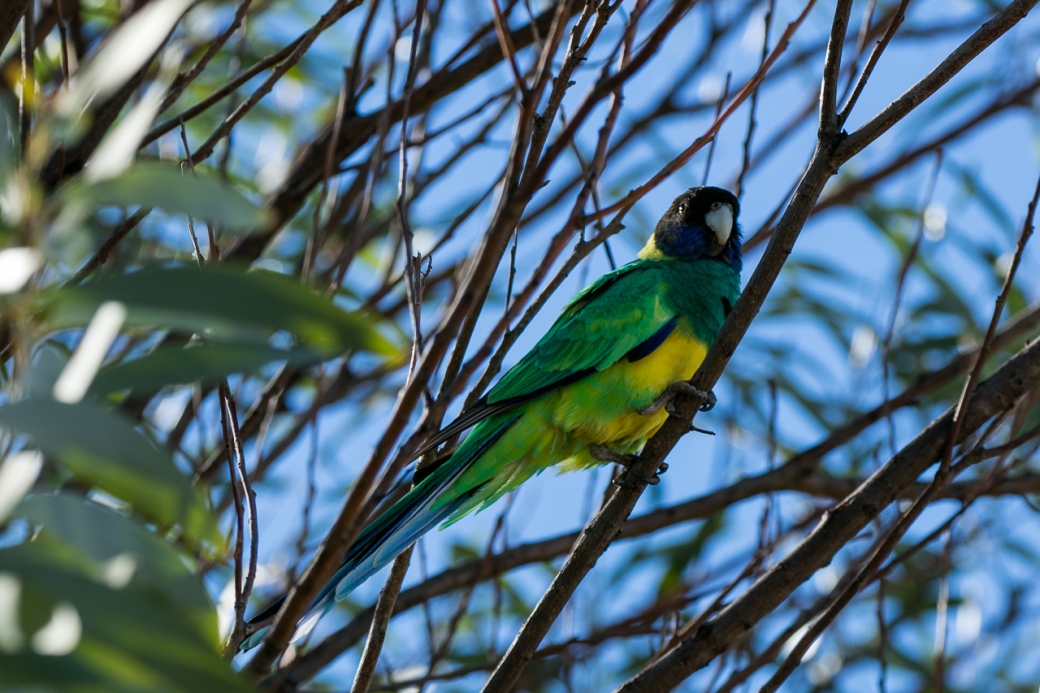 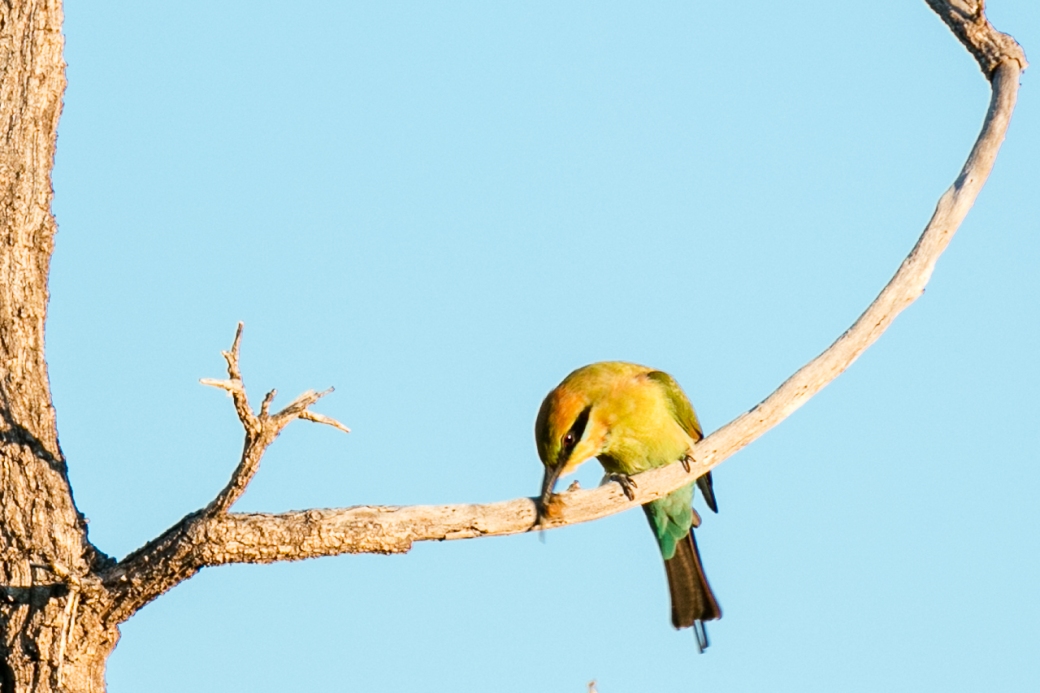 We’d hoped to see loads of Major Mitchell’s when we were travelling inland from Geraldton and the Coral Coast, but that didn’t work out. We’d also hoped to see them around Tom Price and Karijini National Park, but no such luck. Then, just as we were starting to feel pessimistic that we’d ever see them in the wild, we read about a population that feed at the bottom of Wolfe Creek meteorite crater, southwest of Kununurra. At first it sounded a bit far-fetched to us, but the information came from the Department of Parks and Wildlife website, so we decided it must be true. 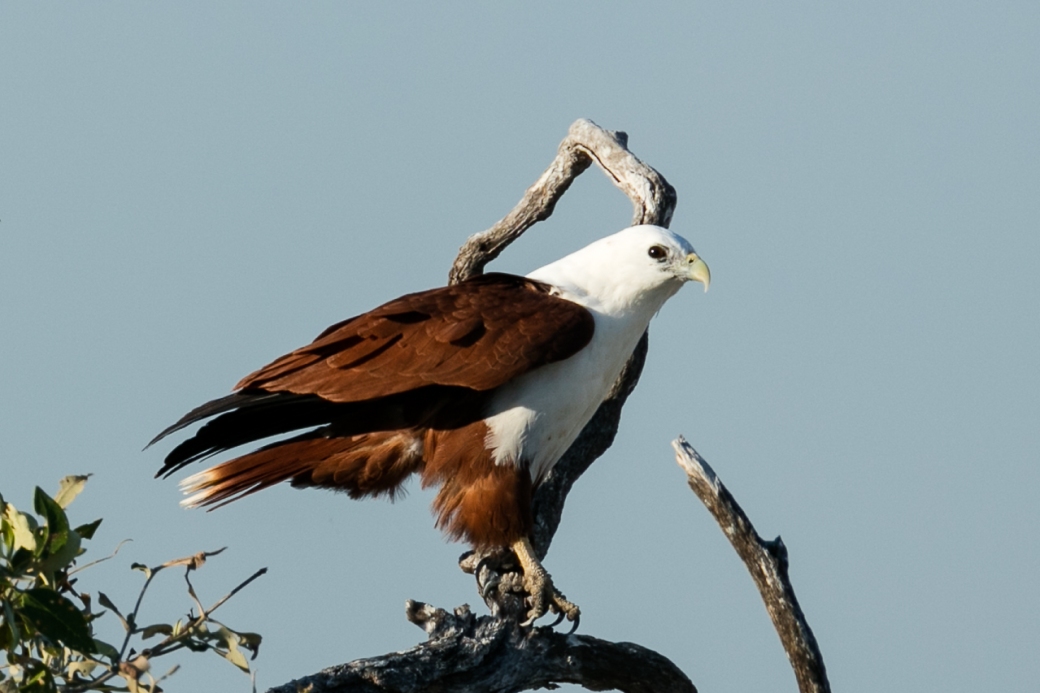 We’d been thinking of visiting the crater as a side trip on our way from Derby to Lake Argyle, but a few things had been putting us off. First, the horrible association with the Wolfe Creek horror movies – somehow, camping under the stars seems less appealing when you can’t stop thinking about psychotic serial killers. Weird, huh? Also, it seemed an awful long journey down a difficult, corrugated road and through an otherwise uninspiring desert landscape just to see a big hole in the ground. But the promise of finding a population of elusive, stunningly-beautiful parrots feeding at the bottom of the crater made the trip much more appealing.So we headed off, Al on a mission to film the crater using Bumble (our recently purchased drone) and me with a vision of photographing Major Mitchell’s feeding on the crater floor.

I had it all planned: I would head down into the crater before dawn, set up my tripod in a quiet, sheltered spot among the wattles and paper barks, and photograph the cockatoos as they swooped down over the lip of the crater, hopefully with their striped crests lit by the rising sun. The composition was clear in my mind: all I needed to do was ensure I had a sturdy and suitable position for my tripod, and the correct camera settings to capture a sharp image of birds in motion – not easy, but also not impossible.

We arrived at Wolfe Creek (after braving more than 100km of the worst potholed road we’ve experienced in 11 months of travelling) and pitched our tent in the shade of some eucalyptus trees. Within minutes of getting it all set up, a pair of Galah’s came to join us, seemingly delighted to share their space with a couple of travellers and their fluffy dogs. To me, that seemed like a very good omen – hopefully Wolfe Creek’s Major Mitchell’s would be confident, too.

The Galahs who kept us company at Wolfe Creek

With the sun almost setting, Al took Bumble up to the top of the crater to start filming, and I did a recce for my morning shoot. It’s an awe-inspiring place, well worth the long and dodgy drive down the Tanami Track, even if you’re not on a quest to photograph Major Mitchell’s. The only other people there that evening were two lovely couples, or “flower children”, as Al called them – young, American travellers wearing flowing clothes and crowns of wild flowers. We chatted with them for a while, and then we all sat and watched in silence as the sun sunk below the distant horizon and the crater disappeared into the shadows.

Then it happened. Just as we were saying our goodbyes and picking up our camera equipment, three Major Mitchell’s swooped up over the edge of the crater, whooshed in and out of some straggly eucalyptus trees, and vanished. We were open-mouthed. We saw them for just a few seconds – not even long enough to snap a photo – and then they were gone. It was the most amazing sight: their crests were raised and they were gloriously, psychedelically multi-coloured, even in the dying light, like creatures from another world.

The burning colours of the ‘blue hour’ at Wolfe Creek

We both felt excited and motivated about our plans for the next morning, so despite the dazzling night sky that was lighting up above us, we hit the sack, ready for an early start. The day ahead was going to be tiring, we knew, because we needed to pack up our camp before dawn, head to the crater before sunrise, then drive 700 km and set up camp again at Lake Argyle, hopefully before it got dark the following evening. All of this in the extreme heat of Australia’s far northwest.

After a hot, fitful sleep, we got our camp packed away in time to see the shadows gradually lifting from the crater floor. Hurrah – it was time for some spectacular Major Mitchell photography! As I scrambled down the side of the crater, I could hear and see the cockatoos swooping in the distance, but I had to struggle through a carpet of spiky spinifex grass and thick bush to reach them. The crater is deceptively massive, and so what I thought would be a 30-minute walk turned out to be more like two hours. Not that that was a deterrent, but by the time I reached the Major Mitchell’s feeding area, they’d gone. 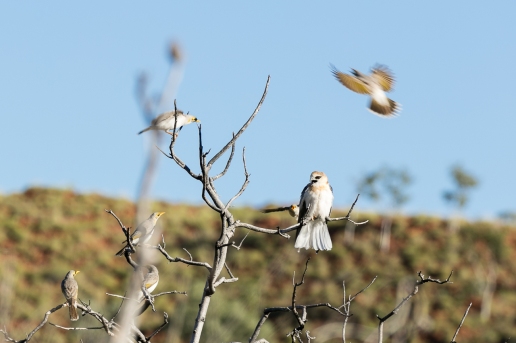 A rare Grey Falcon, which I photographed inside Wolfe Creek Crater

Gone for good, as it turned out. I wandered around with my camera, hoping I’d come across a few stragglers, but they’d all flown away. I did see a rare Grey Falcon and some other beautiful birds, but where were my psychedelic cockatoos, damn it?!

Al was looking at me expectantly as I trekked out of the crater, feeling hot, dehydrated and disappointed.

Me: No luck! I was too late. I could hear them, but by the time I’d scrambled to the trees on the other side, they’d gone!

Al (looking incredulous): You’re kidding! They’ve been here. They’ve only just left. They even flew over the carpark!

Me: [Many unrepeatable swear words!]…

So anyway, thinking that his wife must be having the most incredible photography experience of her life down in the crater, Al didn’t bother taking any pictures of the Major Mitchell’s he’d been watching flitting around the crater’s exterior.

Me, on hearing this: [More unrepeatables!].

But I guess that’s how life goes. Sometimes you miss the bus, and that’s okay. 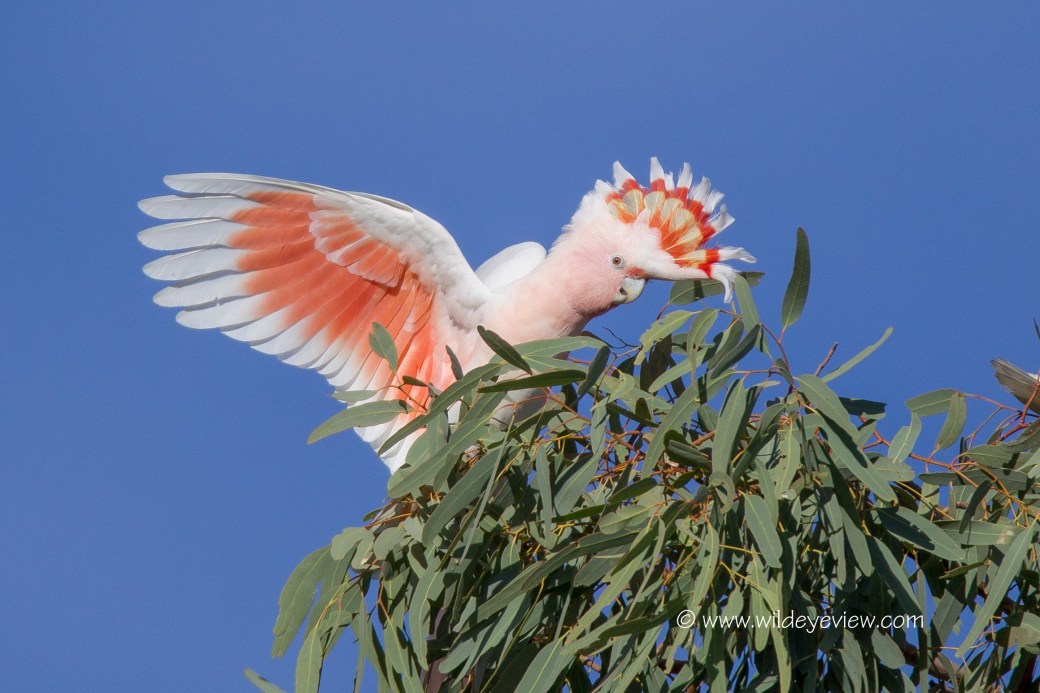 An actual Major Mitchell’s Cockatoo. Not photographed by me!

2 thoughts on “Major Mitchells and Me”