A lady behind me tapped me on the shoulder. “Do you think that’s it?” she asked. “That’s all we’re getting?”

We were standing on a wooden viewing platform, watching a weak sun disappear behind a thick bank of cloud. In front of us, Uluru (Ayers Rock), had briefly flashed to life in the early morning rays, then sunk back into a colossus of shadowy rock.

There was a long silence while we held our breath and willed the sky to clear. But as each minute passed, the cloud thickened, and the light dimmed. Murmurs of disappointment rippled around the gathered crowd, which had grown to at least five hundred people.

“I want my money back!” someone shouted.

Amid bursts of resigned laughter, people began picking up their bags and heading down the hill.

I turned to the lady who’d spoken to me. “Maybe we’ll have better luck tomorrow,” I said.
She shook her head. “We drove for three days for this. We’ve got to get back. Three more days on that tedious road, then back to work on Monday. Lucky you, though – you’re staying on? I hope you get your sunrise.”

Uluru still looking flat, about an hour after all the disappointed tourists had left.

We chatted for a while, and as I tramped back to the car, I reflected on how lucky Al and I are: so lucky to be able to travel together and to have the luxury to take our time over our Aussie adventure. We’ve only been on the road for a week, and we’ve already seen some of the most beautiful sights we’ve experienced in our four years in Australia. We’re both totally smitten with the Australian outback. For me, the road has been anything but tedious. The vast, open skies and time-worn moonscapes have been breathtaking.

Al at the Breakaways, just outside Coober Pedy

The burning colours at sunrise and sunset are magical and seductive, it’s true; every dawn and dusk fills me with expectation.

But the washed out palette of midday is also exquisite, especially when the sun sparkles on the white salt plains and reflects off pale silvery-blue waters. 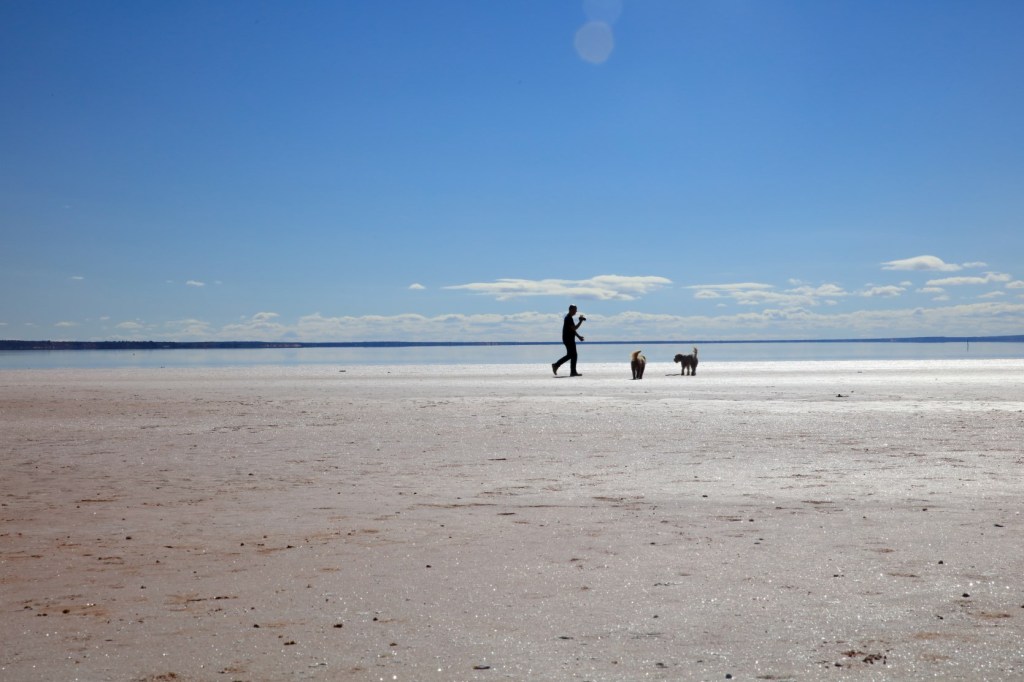 The heat literally shimmers on the hard-baked, multi-coloured earth. I also love the outback’s micro-beauty, which is less dramatic but more surprising.

Our trip has followed a period of unusually high rainfall, so the dark red soil is blooming with desert flowers in every shade of yellow, pink and blue. Where ancient rocky outcrops usually rise above parched, scorched earth, there are meadows and shallow lakes.

The desert meadow below the Kata Tjuta Range near Uluru

Yesterday, after the disappointment of missing out on the Uluru sunrise, I noticed how even under a bleached out sky, when the light is completely flat, the outback landscape is still beautiful. As the day progressed, Uluru began to glow a soft lilac, and as far as the eye could see, the vegetation took on the pastel hues of a winter watercolour.

Desert Oaks in the mid-day sun, near Kata Tjuta

So, yesterday I missed the Uluru sunrise, but that’s okay. And actually, it was cloudy again this morning, but that’s okay, too. Al made me “breakfast in bed” (or rather, delicious coffee and French toast, served in our tent), so I stayed in my cosy sleeping bag with Bailey and Saffy at my feet, and thought about the sunrises to come.

The sunrise over Yulara

*************
A couple of days after the Uluru sunrise experience, I wrote a short poem about how it felt to be the first person to arrive in Uluru national park that morning. For over an hour, I was alone with the rock in the darkness, standing on a massive viewing platform. The other tourists started to trickle in later on, and when it started to get light, they poured off their tour buses in their hundreds.

Two hours to the Uluru dawn
A cold, dewless night
Bone-chilling wind and dark silence
Me, a life-long night owl
Awake before the raucous magpie
Full of expectation

I drive along an indigo highway
The sky opaque, starless
No holes in the moonless cloud
No chinks of sparkling promise
No one around but me
And my fading hopes of sunrise

First to arrive at the lookout
With tripod, camera and lenses
A still silhouette in the blueness
Waiting, watching for the light –
A rainbow of oils
Paint brush, magic wand

2 thoughts on “No sunrise, no worries”