After leaving The Uluru and Kings Canyon region, our plan was to head as directly as possible to the Kimberley region of Western Australia, famed for its beautiful gorges, clear blue streams and azure seas and skies. It was another 3,000 odd km driving, but we were old hands at this – a couple of solid days would knock it out, we reckoned.

We had planned for a couple of nights in Alice Springs en-route to recharge and give Bailey and Saffy their summer clips and a long-needed bath, as we were now heading directly into the tropics.

Somewhere in the world, I have decided, there must be a hospitality school called “Service with a Scowl”. It’s clearly a popular place – its graduates find jobs in every country and every industry, and I think we’ve all met their students in the most unexpected places.

We met one of their star pupils setting out on our journey to Alice Springs – it all started with an egg sandwich. Or rather – it didn’t.

We’d ordered one the day before from our camp ‘café’ as an on the go breakfast option, so we thought a repeat order to get us started on a longish day off-road would be a sensible start.

Our server, that day, had other ideas.
“Two egg sandwiches please”, Tanya requested.
“I can’t do egg sandwiches”, she responded.
“But we had egg sandwiches yesterday and it’s the first item on your menu”, we pointed out
Our less-than-friendly server shrugged. “We have no scrambled egg left.”
“No problem, we’re not any any rush, we can wait.”
“No. It is too much work right now to cook eggs.”

Given that the place was deserted, and the ‘chef’ was sitting reading the paper, this seemed slightly surprising to say the least, but perhaps they were expecting a sudden rush order of camel burgers at any moment (for which the place was supposedly renowned). We left, sans egg sandwich.

An egg sandwich, similar to the one we were denied

It is true, that travelling as vegetarians does make eating a much more complex business.
I have always joked that at ‘Chef School’, on the afternoon of the last day of the course, the instructor tells everyone that to satisfy vegetarians, all you need to do is include on the menu some tasteless mush with spinach and ricotta, and any vegetarians who come to your restaurant will be so pathetically grateful that you have catered for them at all, that they will just eat it and not complain, no matter how appalling the dish is. The problem gets much worse once you leave the metropolitan areas – spinach and ricotta would be considered ‘haute cuisine’ in many of the places we are passing through. Furthermore, pupils from Service with a Scowl are taught that vegetarians are to be treated with contempt and disdain and anyone who doesn’t want a hunk of meat on their plate, however badly prepared and unappetising is clearly not someone who should be welcomed into their establishment.

Most people don’t travel with their dogs, even when travelling domestically, and I always think it a terrible shame when you need to leave some of the family behind in the canine equivalent of Guantanamo Bay. Bailey and Saffy have always come with us and for the most part, have enjoyed the experience. Most of the time, it’s a positive experience for everyone, and it’s amazing how many people you meet who just can’t wait to come and say hello to the furry friends.

However, it does require quite a bit of research to find places where we can stay with them. What you are looking for are the words “pet friendly” on the website or reservation site, and when you find them, you book them quickly. While this usually comes with some conditions (vicious non-house trained Rottweilers needs not apply), it normally indicates well behaved dogs are welcome . What we didn’t realise is that “pet friendly” has a very different meaning to the students of Service with a Scowl. What it means to them, is that pet owners can and should be placed one or two rungs below “vegetarians” in the hierarchy of disdain.

Our first experience of this was in Coober Pedy. We’d booked a small cabin in a caravan park that proudly advertised itself as “Pet Friendly”. All was fine right up to the point where we got Bailey and Saffy out of the car, upon which they immediately went running into the cabin to check it out. Next thing we know, the manager from the office was running over, shouting “You can’t have dogs inside!”

“But you’re supposed to be pet friendly, we replied. “Yes”, she said. “We are. But you can’t have your dogs inside”.

“So not pet friendly then”, we replied.

“Your dogs need to stay in the car,” she explained.

“But it’s far too hot for them in the car!” we pointed out. Even at this time of year, temperatures could reach 30C during the day.

She shrugged and walked off. “They’re not allowed inside,” she repeated as she headed back to the office.

In Alice Springs, we managed to take the interpretation of ‘Pet Friendly’ to a whole new level. Bath day is usually a fairly traumatic experience for everyone, and Bailey and Saffy are masters of making the process as difficult as possible; hiding in the corner and refusing to move, running away and generally making us feel as guilty as possible for suggesting that a bath might be in order. We knew clipping and bathing them in a motel suite was going to be a challenge, but we had no idea what was in store. In fact, the first part of the operation, clipping them went reasonably well, and overall we were pretty pleased with the results. When bath time came, however, things rapidly took a turn for the worse, when we discovered that the bathroom drain was blocked, and the bathroom was suddenly full, not only of wet, soapy, irritated dog, but also of an ever increasing water level that wasn’t going anywhere, except, as it turned out, out the door to the carpet outside the bathroom, and from there, presumably to the apartment downstairs.

Unfortunately the distressed barking that accompanied the whole bathing experience had also attracted the attention of others. While we frantically attempted to soak up the flood with towels, duvets and anything half-way absorbent, there was an ominous knock on the door.

We half opened the door to try and conceal the chaos inside.

“You know you can’t have dogs in here, right?” said a man outside, wearing an official looking outfit.

As there were two wet barking dogs charging round the room, leaping on and off the furniture, scattering water and soap-suds with abandon, there didn’t seem to be much point denying their presence. 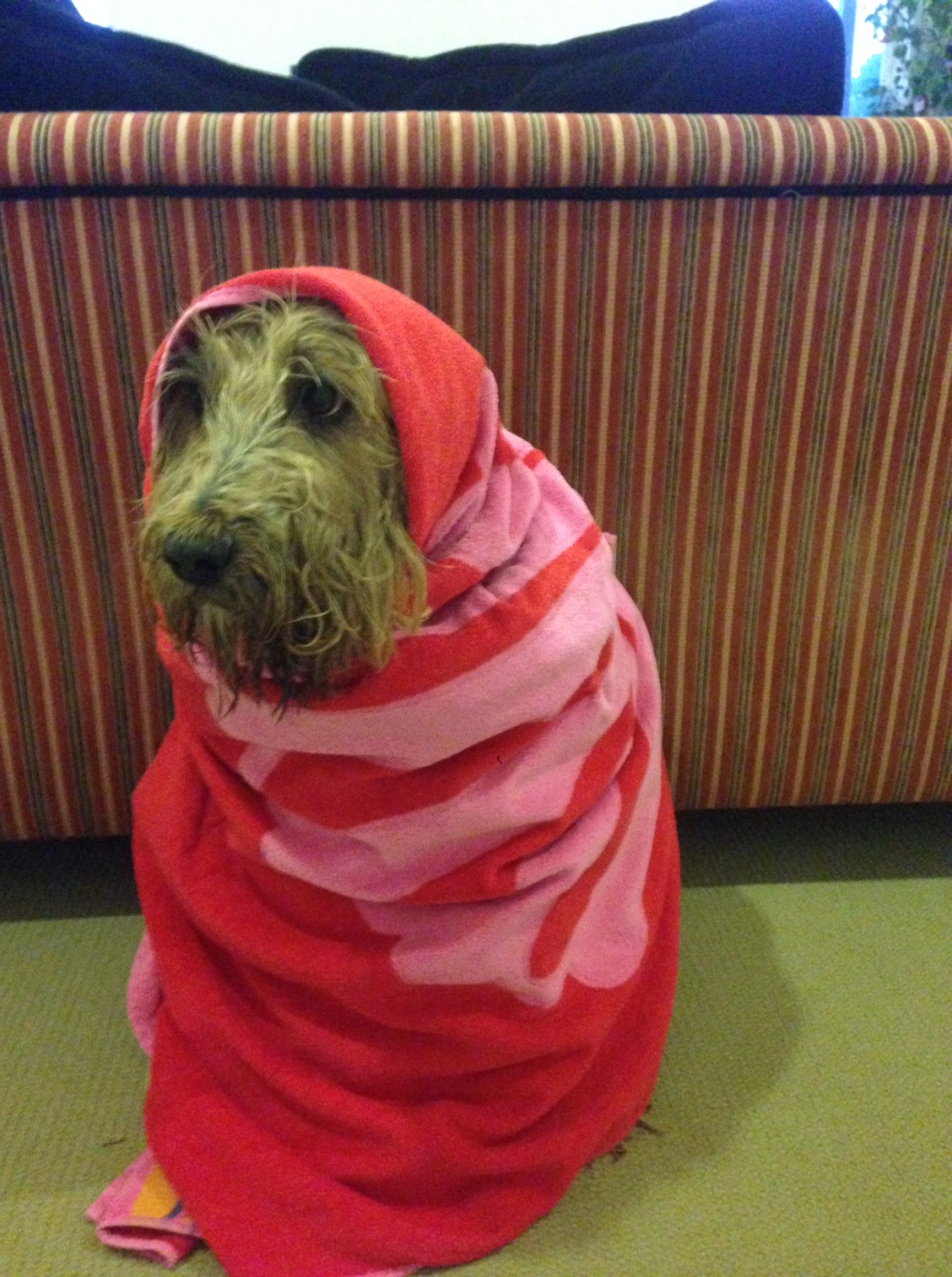 The man shook his head. “Only in the downstairs rooms. This is an upstairs room. I’ll need to tell Michelle.”

“But we only booked this room because it said you were pet friendly”, we explained with exasperation.

The man repeated the point about downstairs rooms and telling Michelle, and vanished.

“Michelle” was somewhat less than understanding. We explained about not knowing about booking a downstairs room and that we really hadn’t made any mess at all and that our dogs are normally super well behaved and we can’t understand why they were so noisy and that we promised that they would be quiet from now on, while hoping no-one was complaining about unexpected leaks in their ceiling. We were politely asked to find alternative accommodation. Under the circumstances, it seemed like a sensible option, so cleaning the chaos as best we could, we quietly left.