It all started when we moved into the place we rented outside Canberra back in 2013.  We’d rented a huge property in the countryside, some 30 kms outside the city, with huge skies and dark starry night.  The sky was almost always clear from horizon to horizon and we got used to seeing the vast Milky Way stretching overhead – even becoming moderately adept at spotting some of the major constellations. But I wanted to see more. I’d always been fascinated by astronomy and so, curious as to what else we could see in the night sky, I went ahead and ordered a telescope.  And a bottle of whisky (more on that later).

The telescope duly arrived, and things went well enough to start with.  It was about the size of large bucket and bright orange in colour.   Getting it assembled and set up was easy enough, and within an hour or so we were staring at Jupiter through the eyepiece of the telescope.  That was easy I thought. What else can we look at?  Like all modern telescopes, this one had a pre-programmed database of objects to view, so having taken a look at the moon and all the planets on view that night, I started to look at some so-called ‘Deep Sky Objects’.   These are things such as nebulae and galaxies that are far far beyond our solar system and are generally the most spectacular looking objects in the sky.  One of the easiest to spot (and brightest) is the Orion Nebula, which is almost visible to the naked eye, around the middle star that makes up Orion’s sword – visible in the Northern Hemisphere winter, and our summer.    Through the telescope, the Nebula was clear and bright, a swirling cloud of glowing gas.  Thinking that this astonomy malarkey was clearly pretty simple, I then pointed the telescope at another famous nebula, known as the ‘Horsehead Nebula’, which is just a few degrees away from the Orion Nebula.  Only this time, there was nothing to see.  Just a few stars and lots of darkness.    Assuming I’d done something wrong, I went back and checked everything was set up correctly and had another go.   Still nothing.   Hmmm.  I tried a few more Deep Sky Objects from the telescope’s database, and quickly discovered the same thing that all amateur astronomers learn very early on in their careers.   Other than the planets, most of those amazing photos that you see of objects in the night sky simply cannot be seen through the eyepiece of a telescope, especially a small, amateur device like the one I had purchased.  At best, all you can see, after several minutes of staring through the eyepiece, is a faint smudge in the sky, and for most of us, there is limited appeal in staying out in the cold nights of winter to look at small fuzzy blobs for hours on end, even if there is a bottle of whisky to keep you warm. Setting up the telescope at Hideaway Bay, close to Airlie Beach, with the Milky Way overhead.

And so, it is at this point that most telescopes are dismantled and consigned to a cupboard, only to be brought out on rare occasions when a visitor shows an interest and asks a question like ‘Can I see Uranus tonight?’  Clearly we have some unusual visitors, to be fair.

The problem, of course, is that most astronomical objects are incredibly far away and very very faint, and only a tiny amount of light from them ever reaches us.  Our eyes just aren’t sensitive enough to see these incredibly dim objects properly, even through a telescope.  So, in order to ‘see’ them, you actually need to collect their light for several minutes at a time onto a photographic plate or digital camera sensor – and of course, that’s where things start to get complicated (and expensive).  So, my telescope, like many others, sat gathering dust from that point forward.

But I hadn’t forgotten my dream of being able to view these extraordinary, beautiful galaxies and nebulae, and while the telescope sat idle, my thoughts did not.  Unfortunately work, travel and a move to Sydney, where the stars were barely visible at night, meant that this was a hobby that had to wait.

But when we decided to set out on this trip, heading into the dark interior of the country, it seemed like an ideal opportunity to dust off the telescope and have another go.  This time, however, I would be properly equipped for the job.  That meant learning about astrophotography, the science (or art) of taking photos of the night sky, and purchasing a ridiculously expensive specialist camera from the US.

As it was, we had to wait quite a while before we had an opportunity to try this new setup, and it was only when we were staying in the Byron Bay hinterland that we had a chance to unpack all the equipment and have a go.

The first thing that you learn, is that taking a decent astrophotograph via a telescope is both technically challenging and very time consuming.  Who knew that ‘dithering while drizzling’ wasn’t a recipe to get wet in the rain, but important steps when taking photos of the night sky.   And it turns out that you can’t just take one long exposure photo – you have to take lots of them.  You may need to take tens, if not hundreds of photos, and then use sophisticated software to sort through them all and ‘stack’ them to produce a composite image.  Even after that, there’s a large amount of additional work to do before you get anything worth looking at.  And all of that depends on having clear skies without too much wind and not too much moon either. 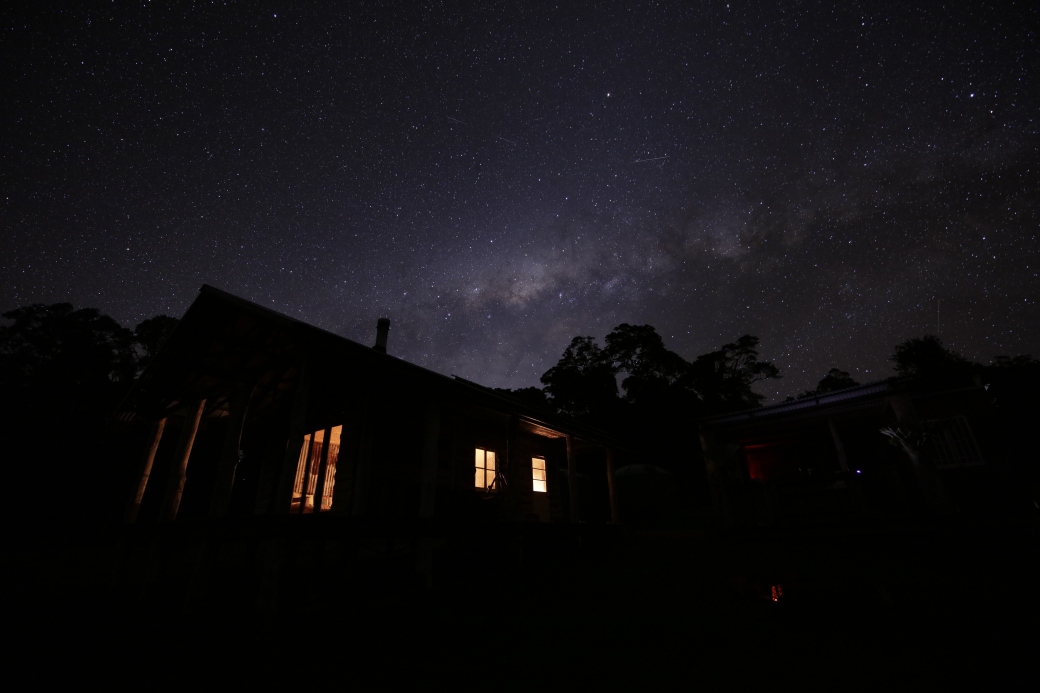 One of the first dark sky sites we sought, at the Richmond Ranges. Beautiful night skies.

So, night after night, I would get the telescope and camera set up, in eager anticipation of a clear night – and almost every night, the wind would get up and the clouds would roll in – and I would have to put the whole set up away again, just as the rain set in.     And on those few nights when the wind, clouds and rain were not halting proceedings, then some technical issue would send me scurrying to the manual, and at times, back to the whisky bottle as well.  After one unbelievably frustrating night, when both the elements and almost every piece of equipment seemed to be conspiring against me, and the whisky had taken a hammering as a result, I announced that the whole lot was going to tied to the back of the Land Rover and dragged to the nearest waste site where it could hopefully be crushed into tiny pieces.

But, this was now a bug that I couldn’t give up on.   So – when it was time to move on, we had a look at the map and thought about where might be a better bet to get clear night skies.  As it happens, Australia recently designated the Warrumbungle National Park, deep in the New South Wales back country as its first ‘Dark Sky’ National Park.  Not only is the park famous for its spectacular scenery, it is also host to Australia’s largest Observatory complex, including the famous Anglo-Australian Telescope, completed in 1973 and one of the largest telescopes in operation in the world today. 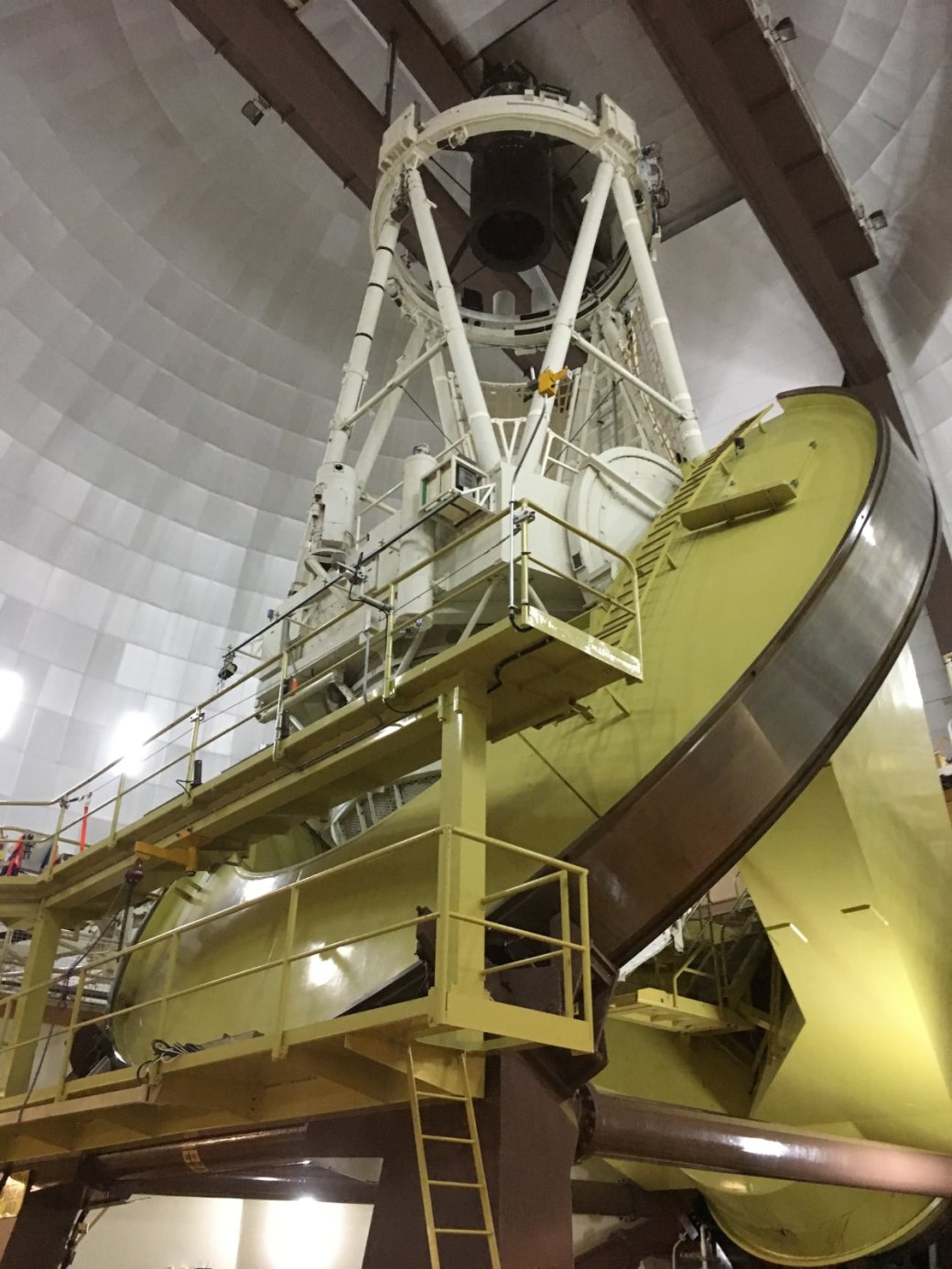 The inside of the Ango-Australian Telescope dome, showing the actual telescope.  When it comes to telescopes, size really does matter!  This telescope has a 4 metre primary mirror.  Our telescope has a 20cm mirror.  A slight difference in scale!

The park surroundings are still sparsely populated, which makes it an ideal spot to set up a telescope – whether the enormous Anglo-Australian telescope, which sits atop a large hill, or my slightly more modest orange bucket thing, that conveniently slotted into a spare space in the car. 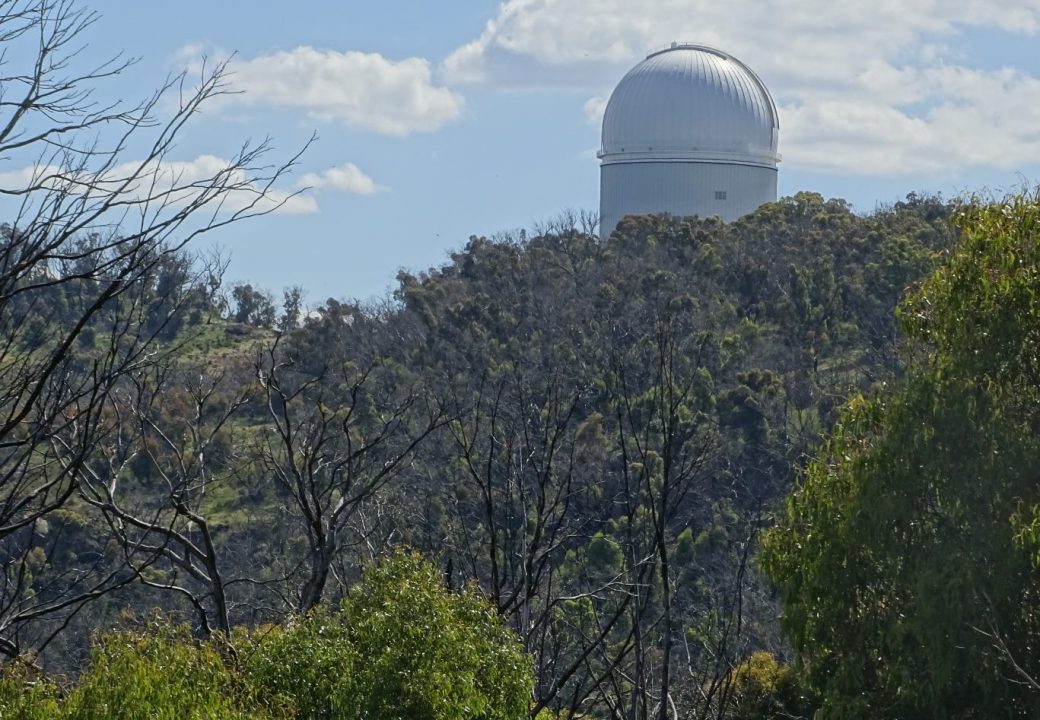 The Ango-Australian Telescope, taken from the Warrumbungle National Park

So – some four months after we set out, we finally got a chance to try out our set up and see whether we really could take photos of some of those extraordinary night sky objects.    We were staying at one of the strangest places we had come across during our travels. A pottery, set on a farm in the forest and seemingly run like a ‘commune’ where people came to visit and never leave.      But the skies were truly dark, and for the first time in weeks, we had still air and clear, pitch dark skies to see if we could make this work.  And bugs.  Millions and millions of flying bugs, but that wasn’t going to stop us. 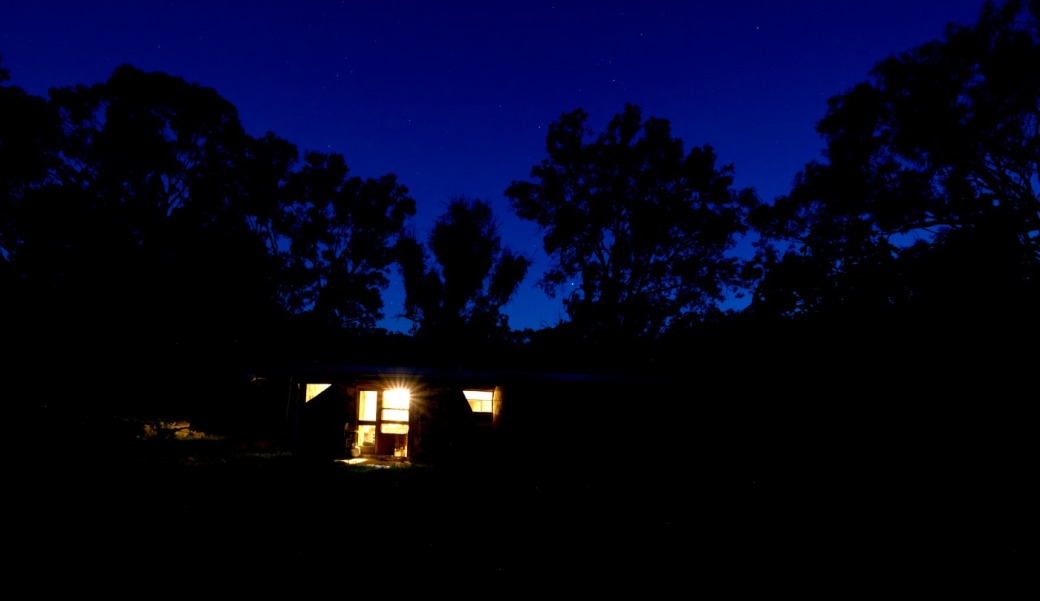 Waiting for the stars to appear at the place we were staying, close to the Warrumbungle National Park

Remembering my first night with the telescope, I decided to try those first deep sky objects I had tried to view with the telescope.    Having finally mastered the equipment, or well enough to pretend that I knew what I was doing, I set the scope to track and photograph the Horsehead nebula – or at least the spot where it should be.  And when the pictures had been catalogued, stacked and processed, finally, there it was. While it might not have rivalled the photos taken by, say the Hubble telescope, I was finally able  to ‘see’ the Horsehead Nebula through the telescope. The Andromeda Galaxy. The closest spiral galaxy to the Milky Way, and one that we’ll be colliding with in four billion years! 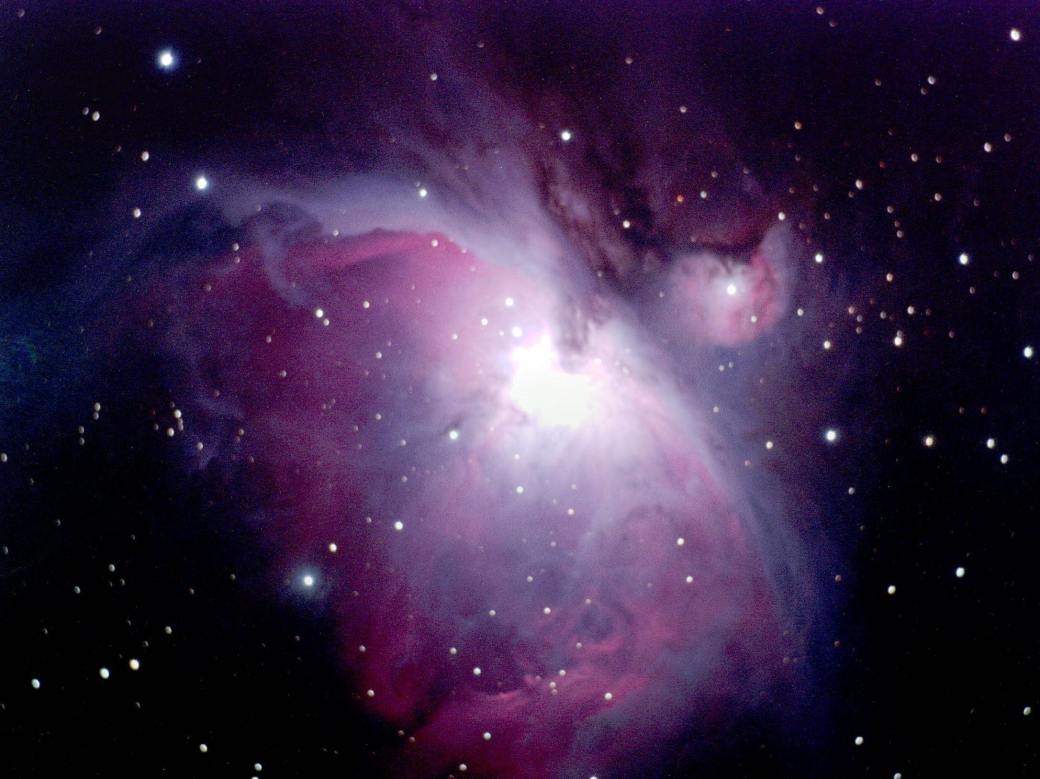 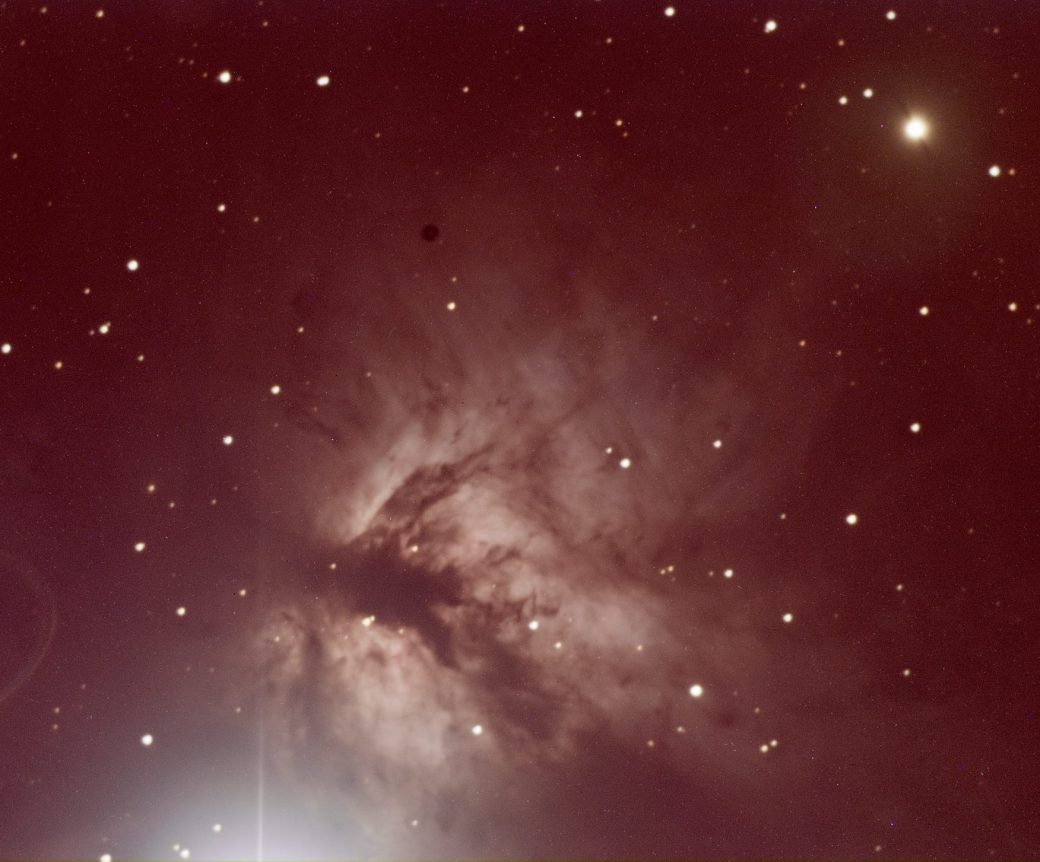 The ‘Flame’ Nebula. This is right next to the Orion Nebula but is a totally different colour 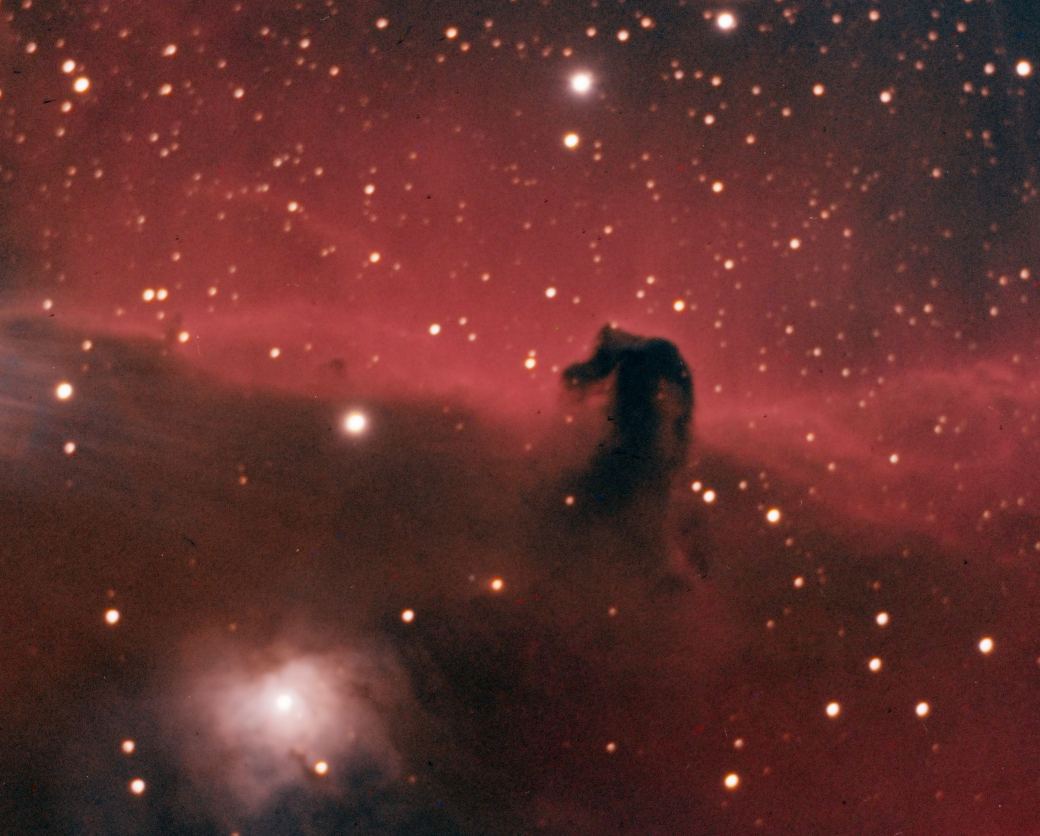 The famous ‘Horsehead’ Nebula and the reason I got into this hobby in the first place! The colour is genuine – it really is a dark shape against a red background made up of glowing gas.

During our few nights at Warrumbungle, we actually managed to get images of 4 different ‘Deep Sky’ objects out of some 15,000 that have been catalogued to date.  I think I’m going to need a bigger bottle of whisky.

4 thoughts on “Nightscapes of the Southern Sky (Part 2)”