Neither Tanya nor I have ever been in prison.  That’s hopefully not too much of a surprise to anyone, but should we ever be tempted to commit any serious crimes (beyond washing dogs in motel rooms), we just need to remember that neither of us would do well in a prison cell.  How do we know?   One word.  Roadhouses.  These “all in one” stopovers that are dotted around the more remote parts of the country.  As well as fuel, they also provide hot food, basic supplies, local souvenirs, advice, gossip, camping and accommodation for those in need.  They vary from being well-kept and immaculate to places that really should be burnt to the ground and then encased in 6 metres of concrete, Chernobyl-style.  But more on that later. 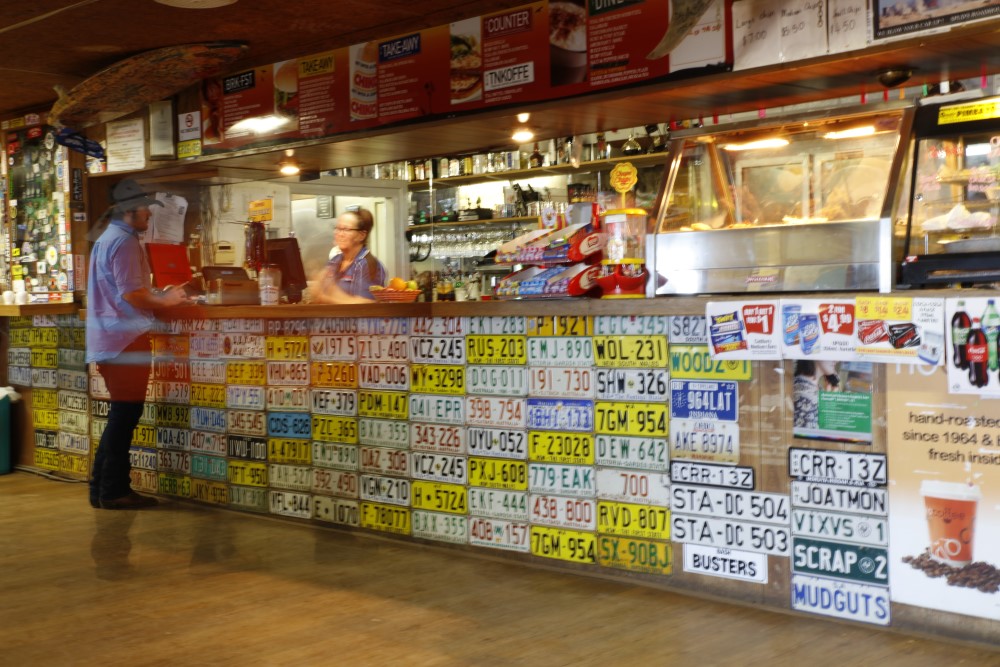 Spud’s Roadhouse, Stuart Highway.  Quirky and Fun but not sure I would want to stay here (but they did do good chips!)

We’d put about three weeks aside to explore the Kimberley, in Australia’s remote Northwest corner.  Although only a small area relative to the whole continent, the Kimberley is actually a massive expanse of land.  For some reason, large tracts of land are always compared to the size of the UK and against this measure, the size of the Kimberley really does start to come into perspective – it’s nearly twice the size of the UK (or 1.6 New Zealands if you prefer a Southern Hemisphere comparison) yet it has a total permanent population of maybe 40,000 inhabitants, of which some 50% are indigenous. Given the remoteness and tiny population, roads are few and far between and you can sometimes drive for an hour or more and not see a single other person, vehicle or building.  That’s especially true of the “Gibb River Road”, a 650 km unmade road that connects the Western and Eastern ends of the Kimberley and is considered one of the “great drives” of the Australian Outback.

Imintji Roadhouse, on the Gibb River Road. Also does great chips and even better banana bread. This roadhouse is run on behalf of the local Aboriginal community.

We reached the Kimberley towards the end the dry season, and much of the landscape was looking very dry and arid.  Long before you get to the heart of the Kimberley, you see the landscape changing, and red sandstone escarpments start to dominate the surroundings.  Sometimes you pass rocky outcrops that have virtually weathered away, and all that remains is miles of huge square boulders that litter the landscape like the remains of an ancient castle, toppled in a long-forgotten battle.  Sometimes the escarpments resemble the skeletons of colossal creatures, their fossilised vertebrae pointing skywards hundreds of metres above the plains. 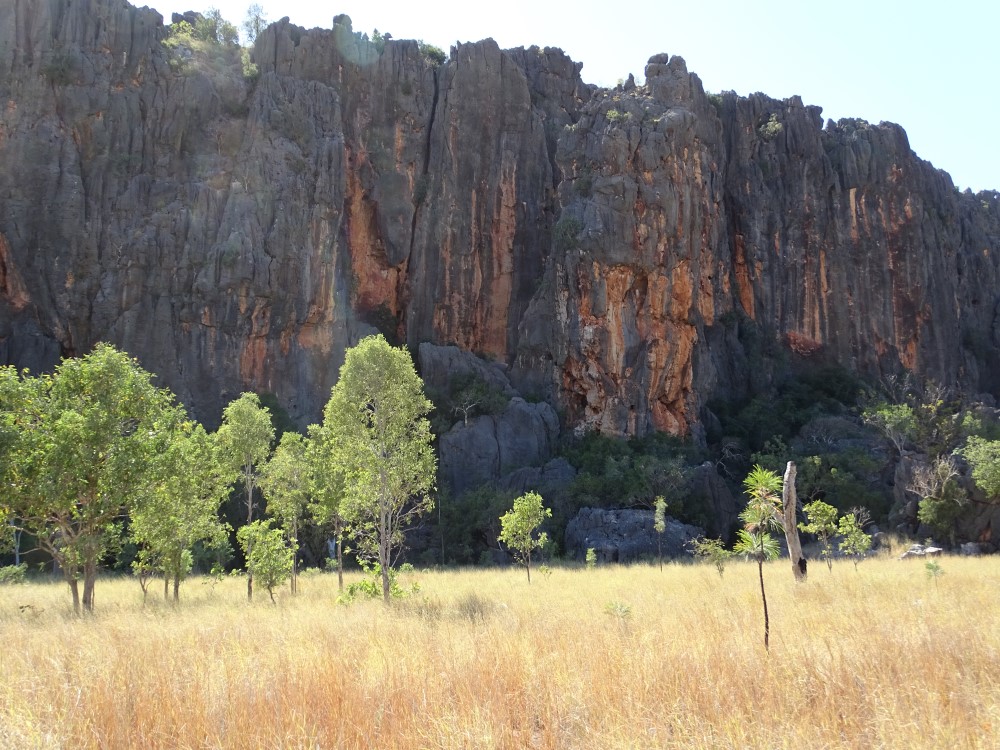 And it’s actually hard to describe the Gibb River region, or the wider Kimberley, without starting to sound like a work experience student at a travel brochure company, who has been given a dictionary and told to use as many clichés and superlatives as can be squeezed into a single article.  There’s only so much you can talk about flaming red rocks meeting white sand beaches, azure skies, secret gorges and sparkling crystal pools without everyone assuming that either you’ve been taking something illegal, or you’ve been recruited by the local tourist information office and are being paid by the word.

And yet, despite the stunning beauty, the Kimberley region is relatively unknown outside Australia and is mostly unspoilt.  Mass tourism has not arrived here, and most travellers in the region are like us, expecting to be self-sufficient.  Outside of Broome and El Questro, you will not find large hotels, fancy restaurants or spa centres.

But of course, the more people write breathless descriptions of the area, the more people will find out about it, and before you know it, you will be able to find your way to the gorges, waterfalls and pools just by following the trail of discarded plastic water bottles, crisp packets and beer cans – the devastating signature of virtually any popular tourist destination anywhere in the world today.

So, clearly, if I am going to write about the Kimberley, then my duty must be to dissuade the rest of the world from coming to the Kimberley and upsetting the fragile ecosystems and landscapes that make up this corner of Australia.  While this blog might not quite have the readership, of say, Conde Nast Traveller, the best thing I can do is dissuade everyone from going there.  Given that Google indexes everything we all post, the best solution, I have concluded is to tell everyone what a terrible place it is.

So, Google, go ahead and index this.

What you won’t find in the Kimberley is amazing vistas and stunning landscapes, sculpted by wind and water over millions of years.  You won’t find a land that has been home to the aboriginal people for nearly 50,000 years containing caves and rocks with their extraordinary art and stories.  You won’t find clear rivers, waterfalls and magnificent gorges, carved from red banded sandstone.   Magnificent, thousand-year-old Boab trees don’t tower above you and vast numbers of gargoyle-like termite mounds like armies of terracotta trolls definitely don’t cover huge plains stretching as far as the eye can see.

You will most definitely not find amazing wildlife, and any photos accompanying this blog piece or any others on this site are definitely not taken in the Kimberley.  They are probably from Reading in the UK, or maybe taken down the Parramatta Road in Sydney.  I don’t remember. 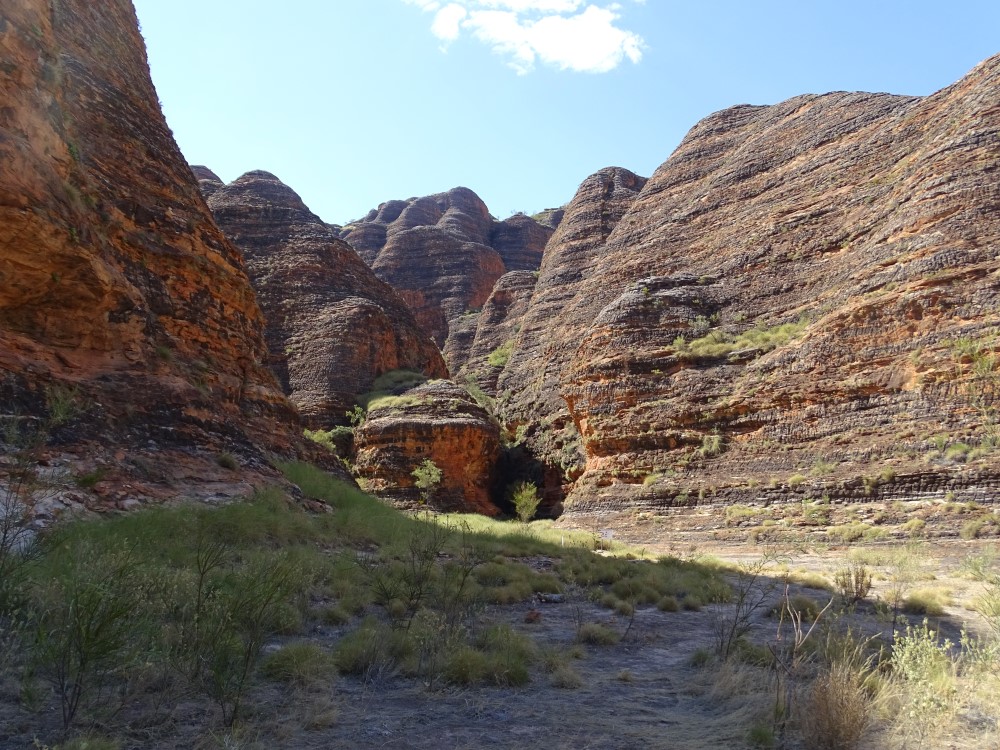 Sydney CBD in the rain. Or the Bungle Bungles, (Purunulu) 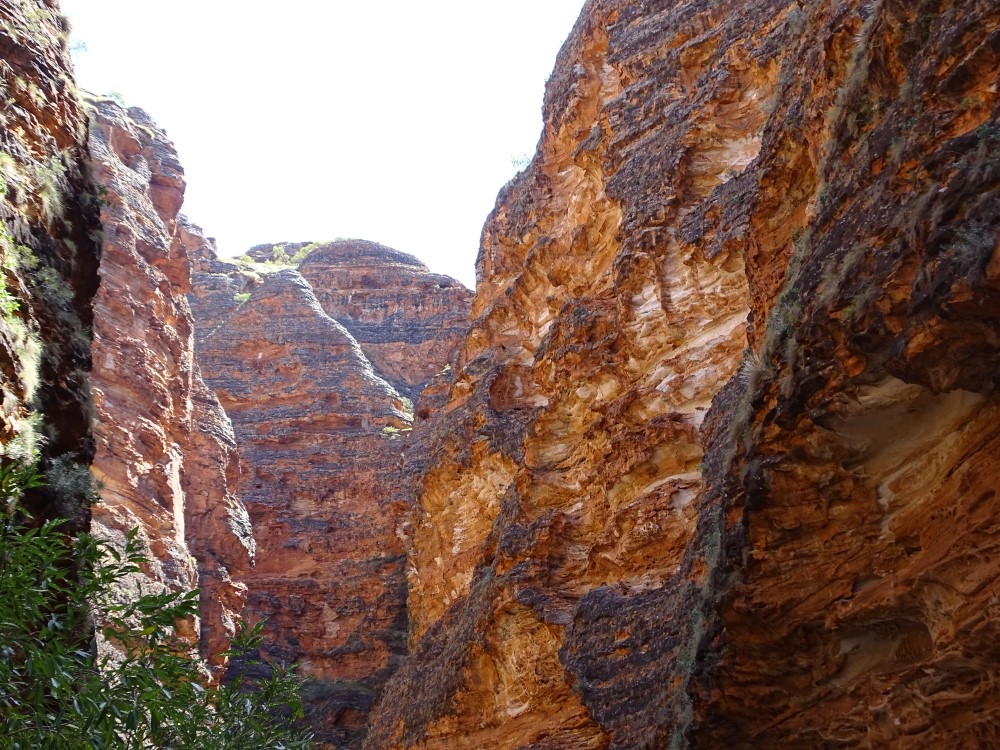 Diligent Corporation’s offices in Christchurch. Or the entry to Cathedral Gorge in the Bungle Bungles

But of course the other side of (not) enjoying such an extraordinary landscape is that you do need to be self-sufficient and comfortable with pretty basic conditions.  After the dirt camping experience in El Questro, we’d decided to give the camping a miss until we could find a camping location which didn’t involve trying to pitch a tent on 6 inches deep of red talcum powder, and so that meant being slightly more imaginative on finding places to stay, especially on this part of our travels.

As a good example of this, we’d decided to book a couple of nights at a location called “Mount Barnett Roadhouse”, mid-way along the Gibb River Road, an innocent enough name that concealed the horror that awaited us.  We should have been warned by the clear note of surprise when we called to book.  “We’d like to book a couple of nights in one of your cabins”, we explained.  We’d left it to the last minute, and were expecting them to say that they were full.  “Really?  Sure no problem” said the voice on the other end without hesitation – clearly she didn’t have time to check any type of reservations system. But maybe she just had a photographic memory of their bookings and didn’t need to check.

Arriving late after a long day driving, things became clearer.   After paying for two nights in advance, we were given a dirty looking key and told to drive through the solid steel gates to the side of the Roadhouse.  Inside, we found what, for all intents and purposes, looked like the set to “The Great Escape”, which had seemingly been left untouched since the film was made in 1963.

Either the set for “The Great Escape” or some Roadhouse accomodation. Hard to say.

A vision of rows of austere, small windowless huts, surrounded by high steel walls and fences greeted us.  A foul odour pervaded the entire place, as if the sewage system from the Roadhouse toilets emptied into the accommodation block.   The showers and toilets were all locked or out of order, save one, small squalid affair.    Our baking hot room or “cell” was perhaps 3m square, and other than a small bed, was utterly empty, save a noisy ancient fridge that periodically shuddered into life with a sound like a shotgun.   A lone hook on the wall served as the “wardrobe” and I hate to think what story the dirty smeared walls told.

Real Roadhouse accommodation, Mt Barnett. Notice the high steel walls in the background. We weren’t sure if these were to keep us in or something else out.

We made it through the night – and fled in the morning, to a stunning (and terribly ugly) gorge a few kms down a dirt track, where I shook off the horrors of the night before with a swim in waters that were most definitely not pristine crystal clear and refreshing.

Clearly the Kimberley is a terrible place.  Best avoided at all costs.