Have you ever come across a person who is so magnetic that they seem to be able to charm the birds down from the trees? We were lucky enough to meet someone exactly like that last week in the beautiful town of Kununurra, a small town in the eastern Kimberley. His name is Rob Storey, and he took Al and me on the wildlife tour of our lives.

Meeting Rob and his wife Vicky was a case of serendipity. After braving camping in the wilderness in the extreme heat and dust, we decided we’d try to get a good night’s sleep when we reached Kununurra. Our search led us to the town’s only dog-friendly accommodation: a self-contained cabin, set beside a picturesque lily-covered dam at the edge of Rob and Vicky’s mango orchard. 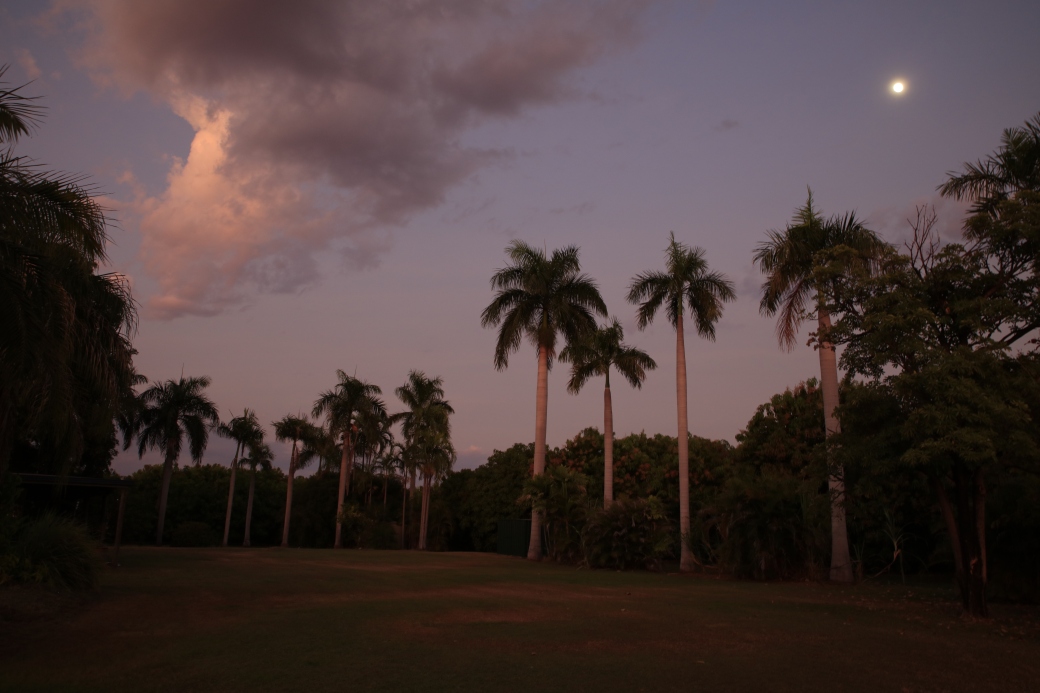 We couldn’t believe our luck when we turned up. Not only had we stumbled across the most idyllic place we’ve stayed so far on our Australian adventure, but within moments of arriving we realised we’d managed to do what months of travel planning can’t achieve – we’d found a path straight to the heart of the Kimberley, via locals who are passionate about showcasing their stunningly beautiful part of the world.

It would take too long to tell the whole story of our time in Kununurra, so I’m going to focus on the day Rob took us along the Ord River on his boat. We’d considered booking a similar excursion with a local tour company, but it’s just as well we didn’t get around to it. The time we spent on Rob’s boat was simply magical; the kind of day that gets embedded in my memory, which I’ll be able to remember with absolute clarity for years to come.

Our trip began about an hour after sunrise, when the light was rose gold and the birds were still singing. The lake was mirror-calm and although there was no breeze, the Kimberley’s intense heat hadn’t yet kicked in. Rob set us up on a comfy sofa-type seat at the front of his boat and then we set off onto the lake, heading for the river. He explained that during the day-long excursion he’d planned for us, we should get to see some great birdlife and lots of crocodiles, but he couldn’t make any promises as each day is different.

Panorama of the Ord River, taken from the front of Rob’s boat “Smoke Money” (bought with the money he saved by giving up smoking)

Almost immediately, the lake’s rich wildlife started swooping down, rising up, and fluttering across from every direction. We felt like we were in a David Attenborough documentary. Every time we rounded another corner of the river, or entered a quiet lagoon, Rob would say: “if we’re lucky, we might see this or that bird,” and as if on cue, there were times that that very bird would appear. It happened with the Black Bittern, which usually hides in the mangroves and avoids open spaces. No sooner had Rob told us about the Black Bittern’s famed shyness, one flew right in front of the boat and landed on a protruding log. A minute later, its mate appeared.

The famously shy Black Bittern. This one flew out of the trees and perched in front of us

We were also lucky to see a majestic White-bellied Sea Eagle swoop down in front of us and pluck a turtle out of the lake; a Rufous Night-Heron posing among the lily pads in its breeding plumage; and the almost comical-looking Jabiru (Australia’s native stork) hanging out just across from our boat ramp that morning.

The beautiful Rufous Night-Heron, posing among the Ord River weeds

Learning from Rob about the most common indigenous wildlife was just as enjoyable, because for Al and me, it was all new and fascinating. We saw whole flocks of White Cockatoos and snow white Egrets skimming the water’s edge. We saw the most delicate, sweet-faced Jacanas walking on water while they fed on iridescent Lacewings. We saw my favourite friends, the Pelicans, floating lazily in their nesting pairs, while Blue-winged Kookaburras and Brahminy Kites watched from the trees. Everywhere we turned, Snakebirds were drying their regal, velvet feathers in the blazing sun. 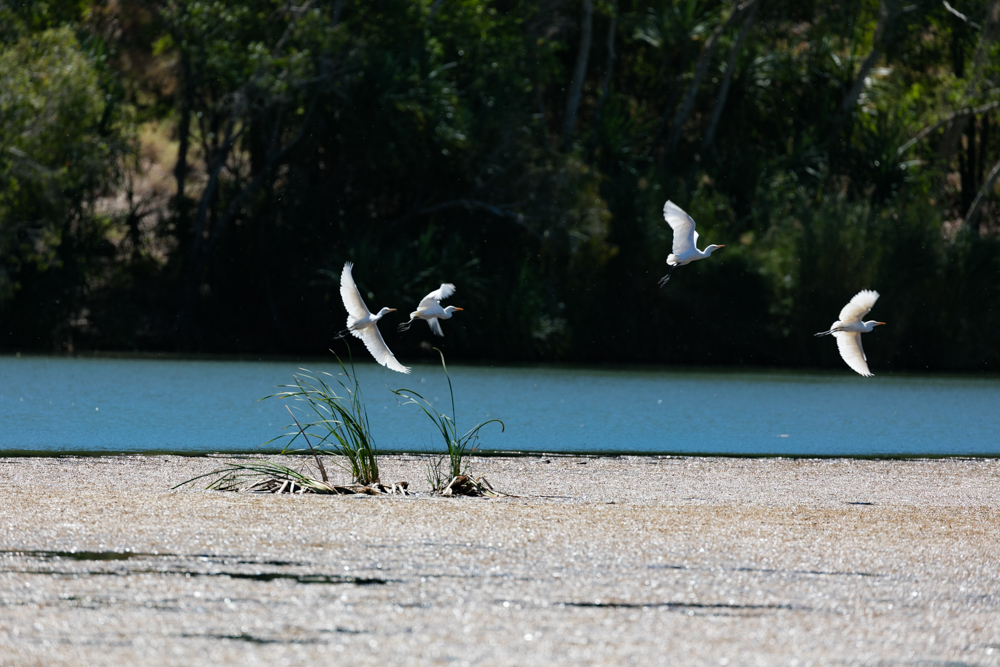 Egrets – the tail end of a huge flock 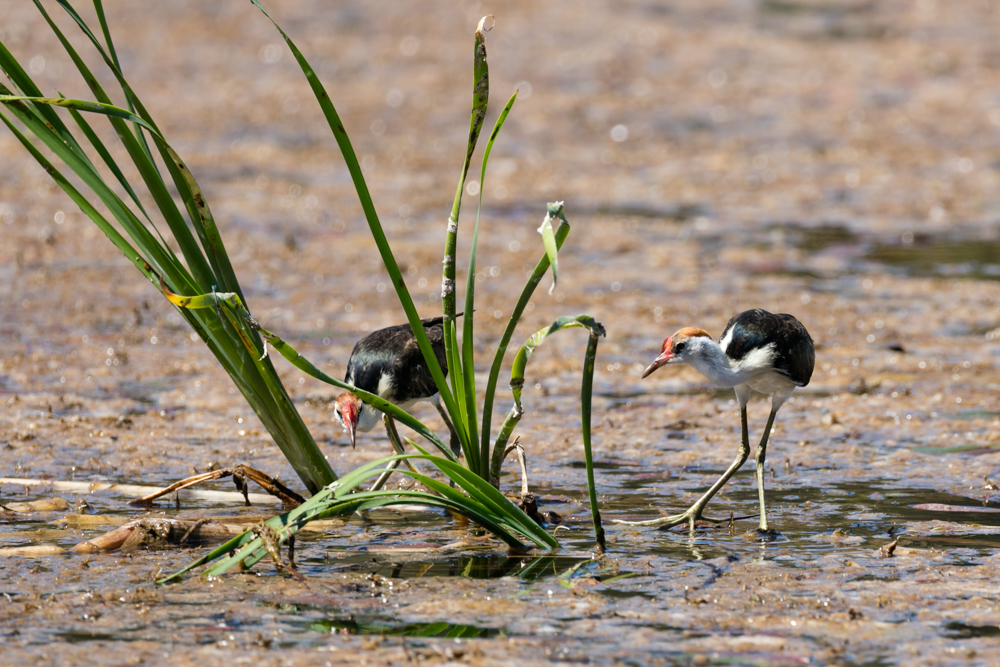 Jacanas, also known as “Jesus Birds” because they can walk on water

Pelicans – very common in the eastern Kimberley. They might not be rare, but I adore them!

A Snakebird, drying his exquisite plumage

A Bee-eater on a dead eucalyptus twig beside the Ord River. These tiny birds are absolutely stunning and they’re everywhere in the Kimberley

A Brahminy Kite. We saw these majestic hawks all over the Kimberley, but this one by the Ord River was especially beautiful

For eight amazing hours, we explored all the secret nooks and crannies of the Ord. And we saw very few other people along the way. Often, Rob would shut off the engine and we’d float along in silence, listening to the birds and watching for the tell tale glint of crocodile eyes peering just above the water line. At one point, Rob reached down and picked up a Pig-nose Turtle for us to see, and soon after that he pointed up into a cave high up in a rocky escarpment, where two Rock Wallabies were sheltering from the midday sun. 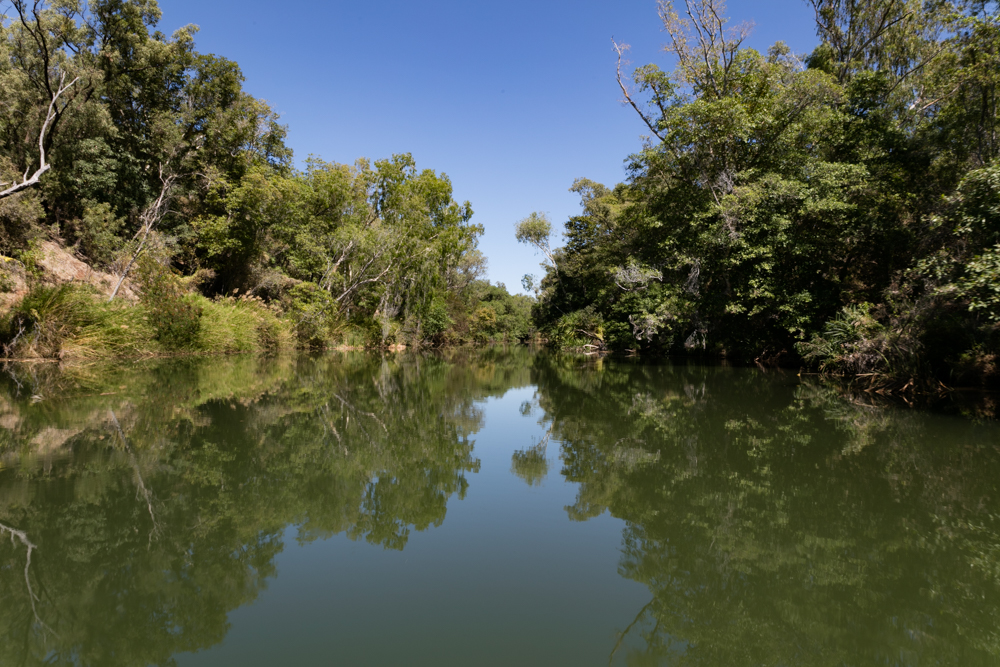 One of the picturesque lagoons, where we floated around, listening to the birdsong

One of the “freshies” (fresh water crocodiles) who came to pay us a visit. I love the tiny blue lacewing that’s hovering above his nose 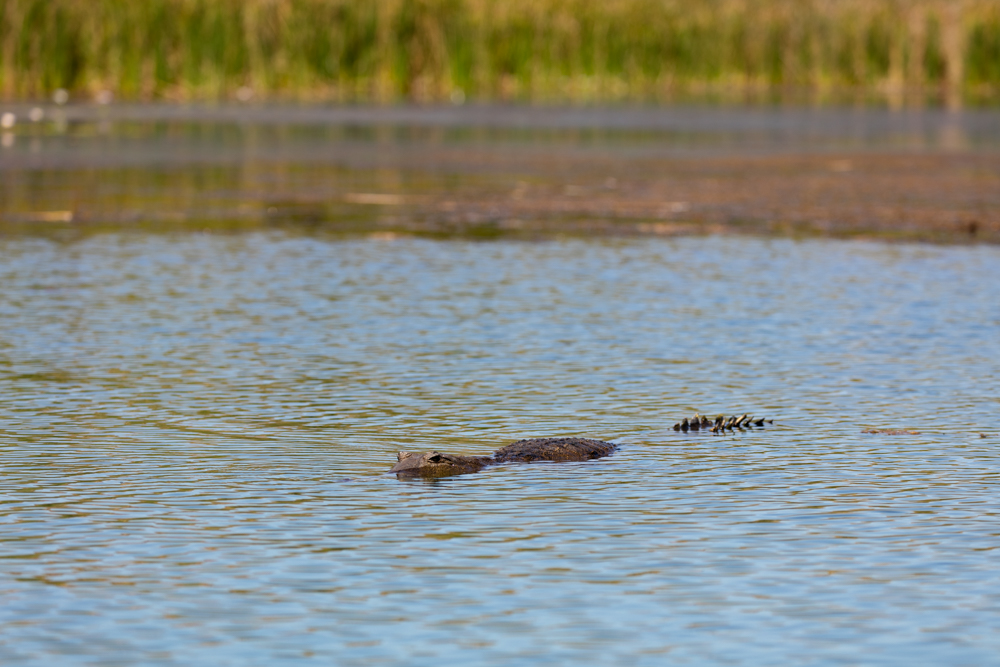 Another freshie. Anyone for a swim? We did swim in the vicinity, but not that day 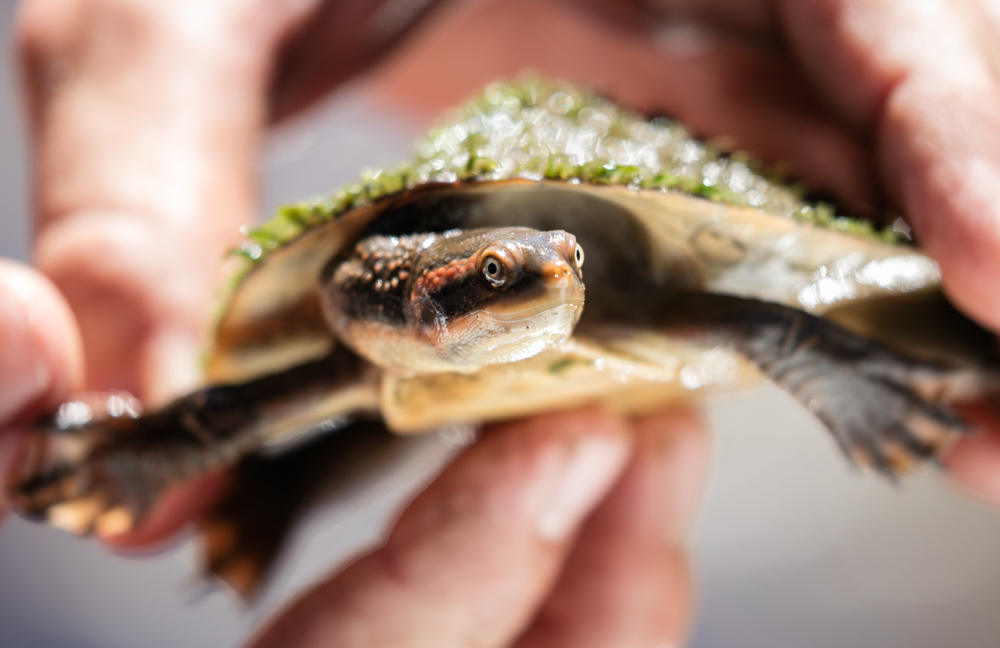 The Pig-Nose Turtle that Rob picked out of the river (and put straight back). Couldn’t someone have thought up a prettier name for this gorgeous creature?!

Fruit Bats hanging in the trees along the Ord River

The shadowy Rock Wallabies, high up in the rock face. Quite difficult to photograph

Towards the end of the day, Al said: “Hey, Rob, how do you do it? Everything just magically appears for you. How did you know those Rock Wallabies would be in that cave, sixty feet up in that rock face? Did you put them there?!” Neither of us could believe how perfectly in tune Rob was with the local wildlife – it seemed almost unnatural. Rob grinned and shrugged. “It’s not me, it’s you guys,” he said. “I’m not usually this lucky.” But his modesty couldn’t keep us from appreciating his talent in all its glory. As well as being lucky enough to grow up on the banks of the stunningly beautiful Ord River, Rob has a special combination of personality, gifts and skills that make him the perfect host and the most amazing wildlife guide. 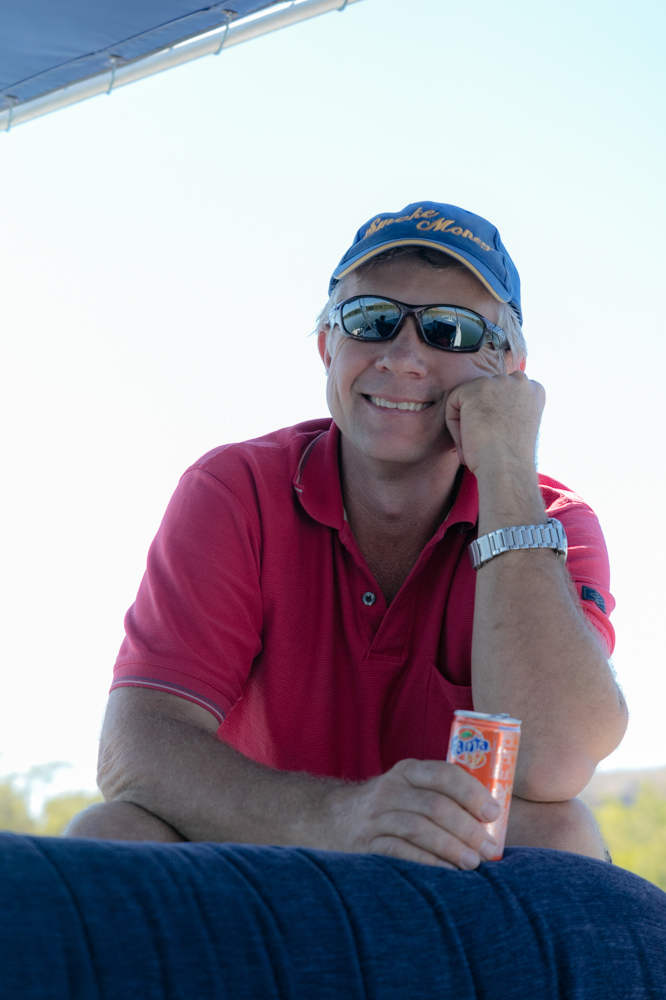 One thought on “The Wildlife Whisperer of Kununurra”