Have you seen the Australian horror movie, ‘Wolf Creek’? I haven’t. I’ve avoided it, not just because horror movies aren’t my thing, but because of a conversation I had with a friend when Al and I were planning our Australian adventure.

Me: We’ve decided to take a year off to travel around Australia. We’re so excited!

Her: Where exactly are you going? Are you heading into the Outback?

Her: In that case, don’t watch ‘Wolf Creek’! It’ll put you off going. Or you’ll lie awake in your tent every night listening for footsteps! Seriously, don’t watch it. It’ll scare the *bejesus out of you. (*She used a different word).

I took her advice and I haven’t watched it, but morbid curiosity made me google it as soon as I got home. It’s based on the true story of a couple who broke down in the Australian Outback, and whose journey descended into terror when a passing bushman stopped to ‘help’ them. I’ll leave the rest to your imagination, but let’s just say it’s enough to make you think twice about heading into the middle of nowhere with nothing but your wits and intuition to rely on.

The reality, though, is that the biggest danger in the Australian Outback is the sun. Every year, people come unstuck because they don’t prepare well enough for the extreme heat and isolation of Australia’s unforgiving interior. And sometimes, even when people have taken all necessary precautions, a run of bad luck can turn a fun adventure into a battle for survival.

Whenever we’ve ventured off the beaten track, we’ve tried to do everything possible to prepare ourselves. We’d heard quite a few tales of woe about travelling in Australia’s remotest areas, and so we’ve ended up with a stuffed-to-the-gills Land Rover that’s arguably over-equipped. Before we left Sydney, we had a huge water tank installed, and we carry extra fuel, tyres, max tracks, repair kits of every kind, enough food (and wine!) to last a few weeks, cool and warm weather camping gear, satellite phone (which we keep charged-up), batteries, tools, spare parts, a mammoth first aid kit – the list goes on and on. Also, whenever we’ve had even the slightest concern about the reliability of our Land Rover’s engine, we’ve had it checked out thoroughly. You can call us cautious poms if you like, but thanks to our cautiousness, everything has run quite smoothly.

That is, until two weeks ago.

We’d had a lovely time in Victoria (see Fairy Tale of Wimmera), and we were excited to be heading back into the Outback proper, into the heart of some of the world’s darkest skies and fiercest landscapes. We knew the South Australian Outback could be challenging, so we’d readied ourselves for the searing heat and the fact that there would be days when we probably wouldn’t pass another car for hours at a time, if at all. And everything seemed to be going quite well with our Land Rover, which had handled some rugged off-roading in Victoria’s Grampians and Little Desert, so we were feeling confident that we’d be okay in South Australia’s arid centre, too.

Our first stop was Lyrup in the Riverlands. As we drove along its dusty roads and then pulled into our accommodation along the banks of the River Murray, we began to wonder if we’d been exaggerating the hardships of Outback travel. Our accommodation for the week was a beautiful old Woolshed, with views across the Murray floodplains and two kayaks for exploring the tranquil surrounds. We were ecstatic to have found somewhere so lovely to stay, and so were Bailey and Saffy, who scampered straight out of the front door and down to the river bank, where they feasted on fish heads left by the local fishermen. Mmm…so tasty and so fragrant! 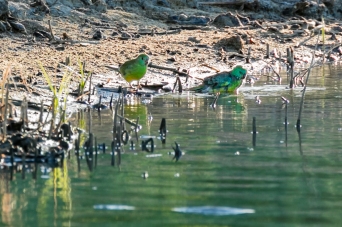 It was a week of surprises, because we hadn’t expected the area to be so green and inviting. We thought it would be arid and desolate, but thanks to the reliable supply of water from the Murray River, the Riverlands region is fertile and lush, peppered with vineyards, orchards, and farms. It’s also wonderfully peaceful, with fewer raucous parrots than much of Australia and more (much quieter) river birds. 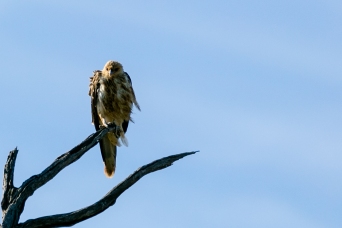 We made the most of our time there, taking the kayaks out at sunset, and setting up Al’s telescope to capture the dazzling night skies. Right up until our last day there, we felt as though the Fairy Tale of Wimmera was becoming the Fairy Tale of the Riverlands. Little did we know at the time that Lyrup was the calm before the storm. 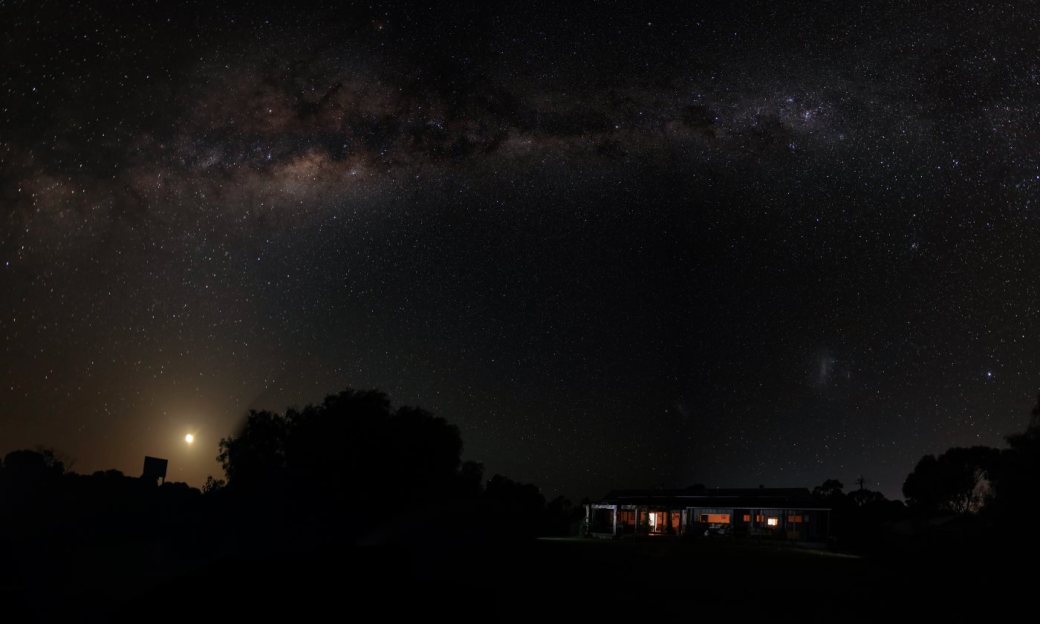 The Milky Way over the Woolshed 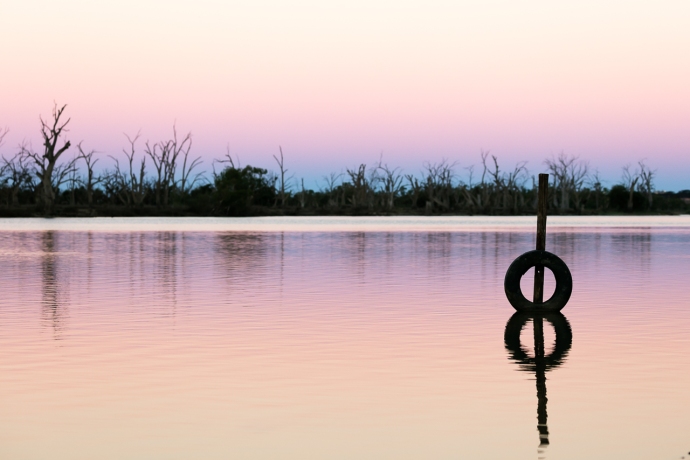 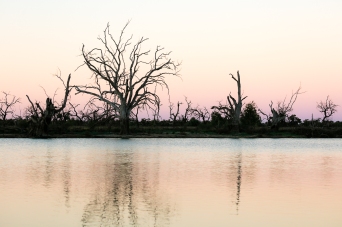 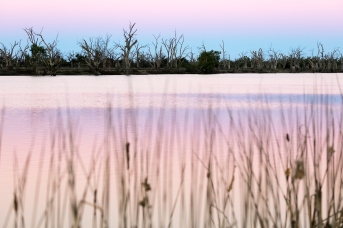 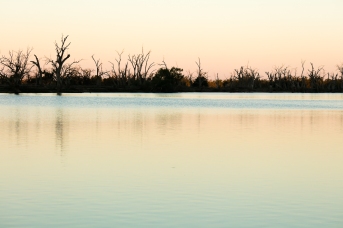 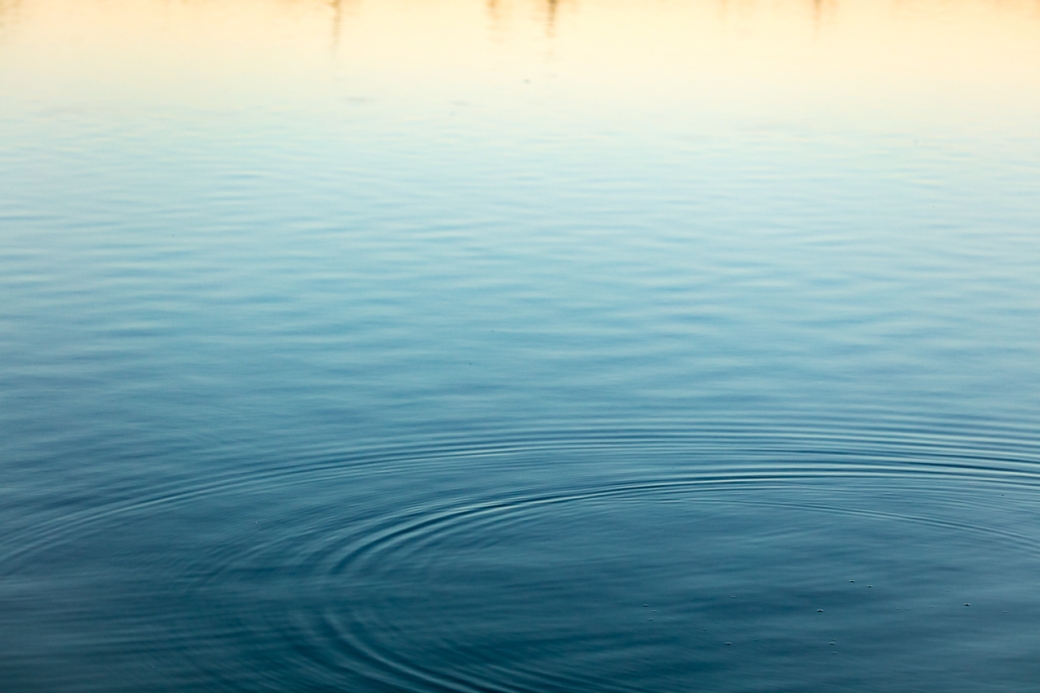 Pike River, near Lyrup. The calm before the storm 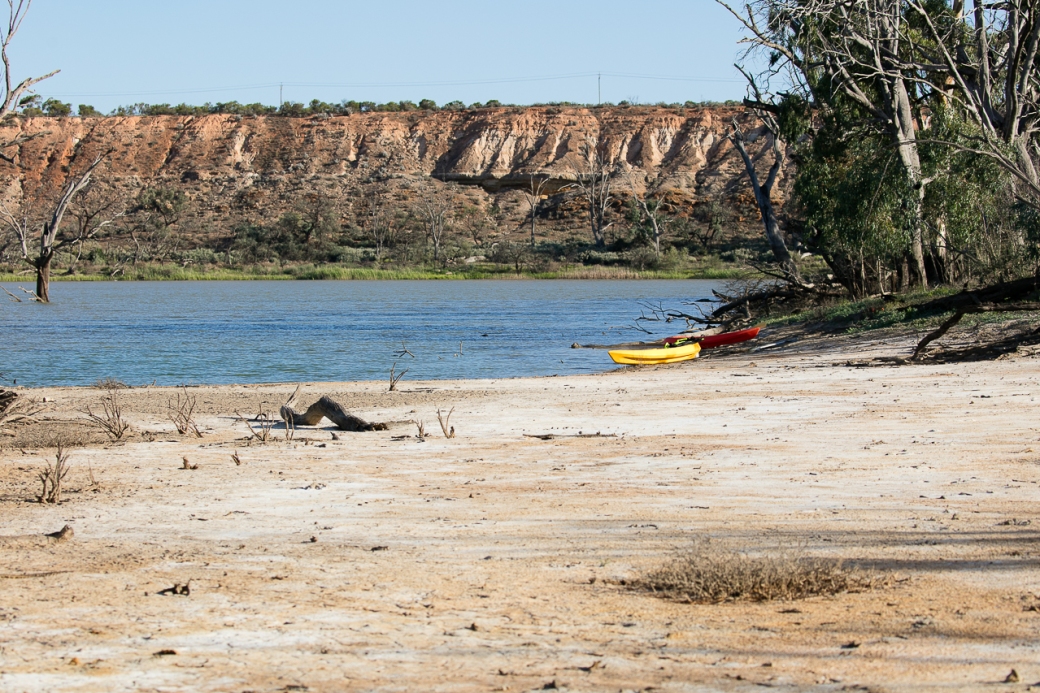 I have to confess, I did have an inkling that difficult times might lie ahead. It sounds a bit hocus pocus, but I had an uneasy feeling in my stomach the day before we left the Woolshed. It had been exhaustingly hot and humid as we packed up the car, and I was feeling quite frazzled, so I thought it would do me good to head out with my camera once the temperature started to drop. I’d seen on the map that there was a lake (Lake Bonney) about 40kms from where we were staying, so I decided to drive there to photograph the sunset. In my mind, I’d imagined a lake with a mirror-calm surface, and huge flocks of birds flying into a pink, setting sun. Yes, I said to myself, that will be the perfect end to a lovely week. What shall I call my blog piece on Lyrup, I wondered? How about something suitably serene like “Feathers of the Riverlands”?

A heron at sunset (photographed through a eucalyptus tree) 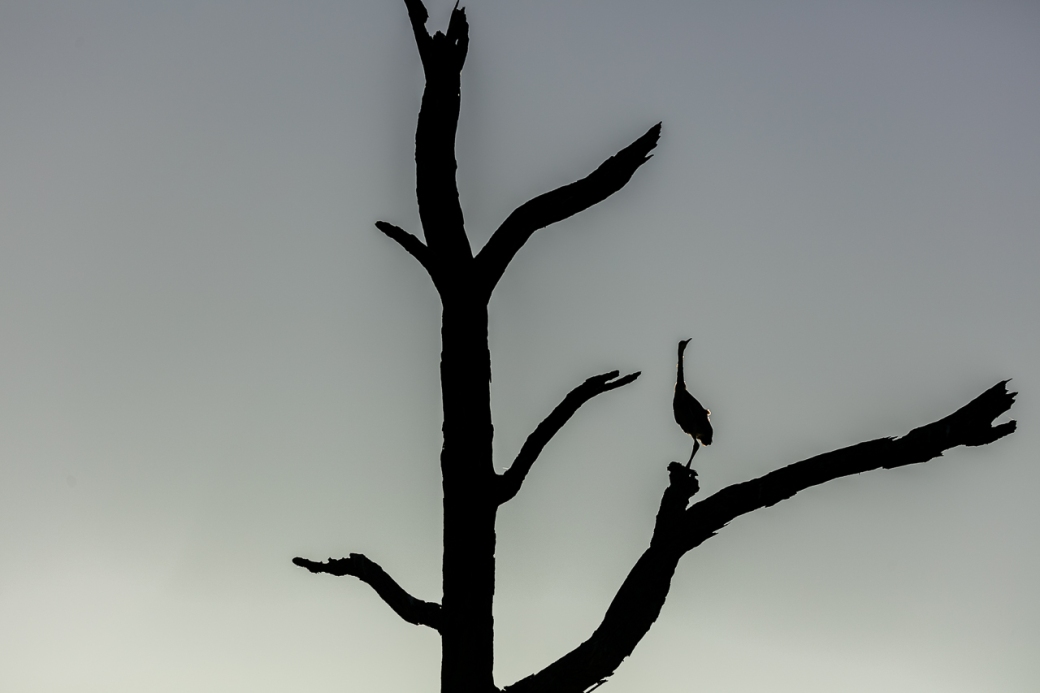 Back-lit heron, perching on a dead tree by the Pike River

But the first thing I noticed when I reached the lake is that it was massive and choppy – more like an inland sea.  Next, I noticed that no one else was there, there were no birds, and it was surrounded by barbed wire. There were also no signs saying “Keep Out”, so I looked for a way in and found a place where people (or possibly kangaroos) had created a channel underneath the fence. It turned out it wasn’t quite deep enough for me – I scratched my scalp as I dragged myself, my camera and tripod through to the other side, but I hoped it would be worth the trouble once I got down to the water’s edge.

It was eerily quiet as I made my way through the lakeside bushlands, and for the first time on our Australian adventure, I felt vulnerable. I’m not sure why, because I’ve spent plenty of time out and about with my camera, often alone and in isolated places, and sometimes at night. But that evening, I felt I was being watched. It was such a strong feeling that I actually thought about abandoning my mission and heading back to the Woolshed. But I decided to press on, take a few photographs, and leave well before dark. It was an unusual spot, and although it wasn’t the pretty, picture-perfect scene I’d imagined, it was eye-catching in a creepy-horror-movie kind of way, which I found interesting.

In front of me, there was a line of drowned trees, sticking out of the lake, burned black against the dipping sun. And where the dark water lapped onto the sand, there was a line of dead fish, still moist and glinting in the fading light. The fish, which were huge – I’m not sure what species they were, but they were the size of full grown salmon – looked as if they’d been killed and then lined up, to lead from the bush towards the drowned trees. I couldn’t fathom why anyone would do that, or how or why so many fish would die at the same time, and then be deposited by the waves in such a strange pattern. Altogether, there were about 40 of these large fish.

The odd scene that awaited me at Lake Bonney

The dead fish looked like they had been lined up

This bizarre scene definitely added to my sense of unease, but despite that, I set up my tripod and took a few pictures as the sun sank behind a thin and almost perfectly straight line of clouds, which reflected the last of the light. I waited until the clouds turned mauve and then quickly packed up my things and headed back to the car. 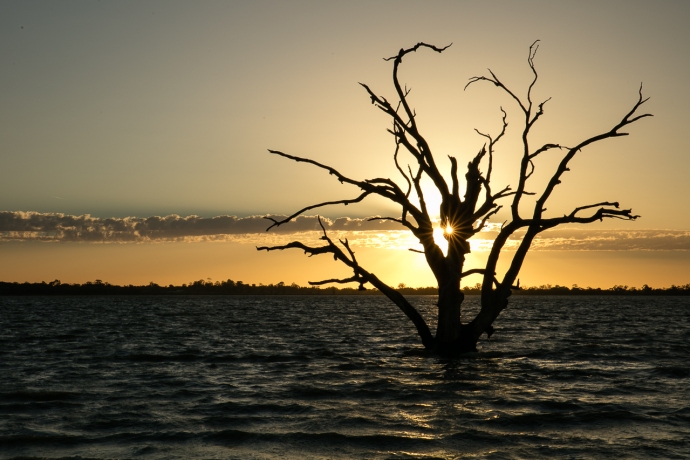 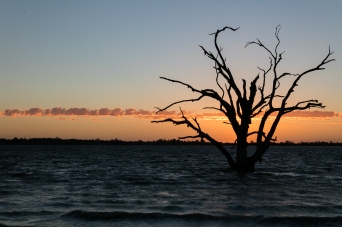 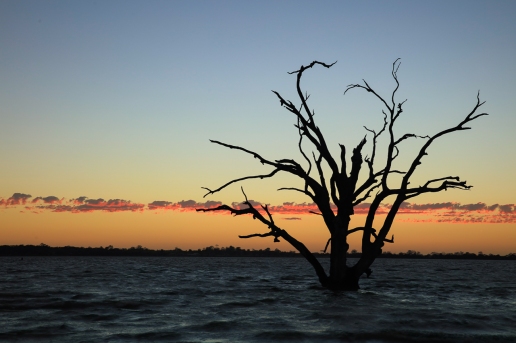 Had someone been watching me? I wasn’t sure. But my internal “danger radar” had been beeping the whole time I’d been down by the lake. And as it turned out, over the next few days that radar got louder and louder until it was almost deafening. But to find out why that happened, I’m afraid you’ll have to wait a few days for “The Scorching Skies Above Us, Part 2,” which tells of our adventures in the parched and arid Flinders Ranges, where even the rainbows look fierce.

2 thoughts on “The Scorching Skies Above Us”