The odd scene I’d witnessed at Lake Bonney (see Scorching Skies, Part 1) was the only negative experience of an otherwise magical week in Lyrup, but as we lifted Bailey and Saffy into the car and set off deeper into the Australian Outback, I couldn’t stop thinking about the masses of dead fish washed up on the sand. Was the lake polluted? Was it possible that the fish had died from the extreme heat? The mercury had been tipping 40 for the past few days, but that isn’t unusual during South Australia’s hot summers; a mass die-off due to the weather seemed unlikely. It had left me feeling uneasy and conscious of one of the great frustrations of ‘travelling through’, especially isolated areas: the difficulty of gaining the local knowledge that comes from being part of a community. If other people had been down at the lake, or if Al and I had been able to stay a few extra days in the Riverlands region, we might’ve been able to solve the mystery of the dead fish.

As it was, we had a carefully-planned itinerary that we wanted to stick to, so we headed back on the road; we became passers-by and Lake Bonney just another place on the map. But even as Lyrup receded into the past and my thoughts shifted to the adventures ahead, I couldn’t shake the sinking sensation in my stomach. It helped that Al’s attention was firmly fixed on that day’s long drive, and I could hear Bailey and Saffy snoring peacefully behind us. But my nerves were still jangling.

From Lyrup, our journey took us northwest, up into the Flinders Ranges, further and further from civilisation. As the day heated up, the road began to shimmer and the green pastures and vineyards of the Riverlands turned into white grasslands and bare earth plains. Much bigger versions of the pink lake that had so enchanted us in Wimmera stretched out beside the long, deserted roads, and we were left in no doubt that we were back in the Outback proper, a place of unrelenting summer heat, shifting mirages, and endless rural hardship.

As we took in the occasional dusty, one-horse town and tumbledown homestead, we couldn’t help wondering about the people who live and die in such fiercely inhospitable places. There’s no doubt in my mind that parts of the Australian Outback are among the most beautiful places on earth, but they’re also some of the most vicious. Stepping out of the car is like stepping into a fan-assisted oven that’s stuck on high. Everywhere you tread, ants scatter, and dehydrated vegetation that has survived the scorching sun, crunches underfoot. Trying to make a living off the land must be a constant, nightmarish struggle. For us adventure travellers, these places are fascinating, sometimes heartbreaking, and often unnerving – knowing that we are about as far out of our depth as we can get, where local knowledge is essential and can be the difference between life and death. 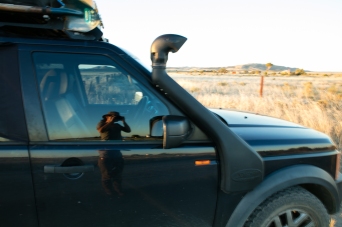 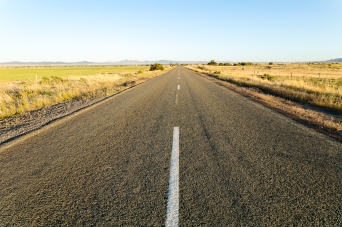 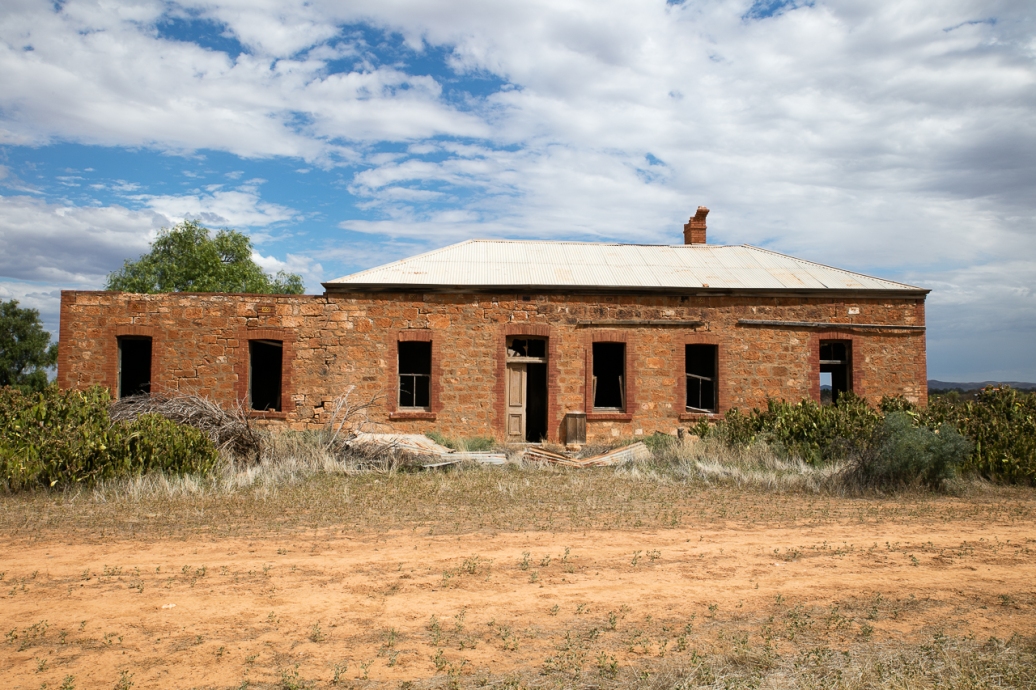 It was doubly unnerving for us on that particular day because, for the first time, our Land Rover was playing up – something was awry with the ignition, and on a couple of occasions the engine sounded like it might not start. It did, thank God, but each time we stopped it seemed to take longer to get going. We couldn’t understand what was going on, because our battery was virtually new, there weren’t any connection problems, and the auxiliary battery’s supposed to provide an extra boost when necessary. We knew we should get it checked – urgently – but we were hundreds of kilometres from the nearest garage. Aware that one false move in the Outback can have serious consequences, we decided not to risk stopping again for the rest of the day, try to make it to our accommodation, and find help in the (relatively!) large Flinders town of Hawker the next day.

We’d booked to stay on a remote sheep station, which was listed on Airbnb as the only dog-friendly place around. The cottage appeared fine online and the Flinders Ranges themselves looked beautiful, so we’d planned to stay there for a week, thinking it would be good to explore the area and get some insight into the lives of South Australia’s hardy station folk. We guessed our hosts would be salt-of-the-earth types: no nonsense, straight-talking Aussies with rough edges but kind hearts. As we headed towards their station, we were quietly confident that they’d want to help out two intrepid explorers with their adorable fluffy dogs and increasingly dodgy car.

The light was fading fast by the time we arrived. The sun had sunk behind the ranges, creating sharp, deep purple silhouettes, and kangaroos were hopping back and forth across the station’s rough tracks. There was nobody around, and we both felt quite tense as we pulled up to the cottage, which looked very unloved. Maybe it’ll be okay inside, we hoped. But no, it was grim (the polite way to describe it). Uncomfortable and dirty furniture had been crammed into a cramped kitchen. A tiny, airless bedroom was reached by a separate, external door, and an insect-ridden bathroom by another. Neither of us spoke. We were both thinking: how will we cope here for an entire week? The night skies will be breathtaking; the rest is going to be tough. But we put on brave faces – at least we’d made it to our destination. It was stinking hot, the shack was horrible, and Bailey and Saffy made it clear they weren’t keen on it either. But the surroundings were stunning, there was running water, and we’d surely be able to get the help we urgently needed, which was by far the most important thing. 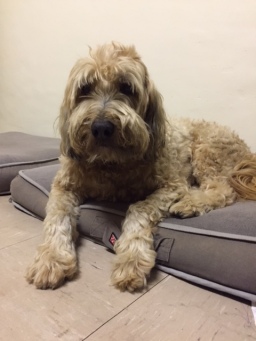 Only that’s not what happened.

About two hours after we arrived, after we’d unpacked the car and tried to settle Bailey and Saffy, our hosts came knocking on the door. Bailey and Saffy bounced off their beds and started barking loudly.

Her: (Hands on hips) Hello. Tanya and Al, is it? That your dogs I can hear? INSIDE? INSIDE our cottage? That won’t do!

Him: (nods in agreement with his wife, looks a bit apologetic, says nothing).

Me: (Going red, I’m sure) I’m sorry? You listed your place as dog-friendly on Airbnb! We told you Bailey and Saffy are indoor dogs!

Her: Not here, they’re not. We ARE dog-friendly – we’ll allow your dogs on our land if they stay outside.

Me: What do you mean? There isn’t even a fence! It’s not safe!

Her: (Shrugs) You can chain them up outside. I’ll get the chains.

Me: Chain up our pets? How is that dog-friendly? What about the dingos? What if your farm dogs harass them?

Her: We’ve only lost one dog to a dingo in fifty years. Snakes, sure, now that’s a different story. But dogs belong outside. I’ll bring you the chains.

They walked off, her huffing and tutting, him looking sheepish.

Al and I looked at each other, panicking. We’d paid for the week upfront, but despite that we both wanted to get the hell out. We knew we were stuck for the night, though – we had a dodgy car and nowhere to go. We made a plan: we’d quietly re-pack the car that night, sneak Bailey and Saffy into the cottage once our hosts were asleep, and then take off at first light.

It felt better to have an escape plan, and we even felt a weird sense of elation as we packed, which we shared with a rather bemused gecko that was hanging out on the kitchen table. We agreed that the little chap, with his sparkly eyes and cute little feet, was the only thing the cottage had going for it. 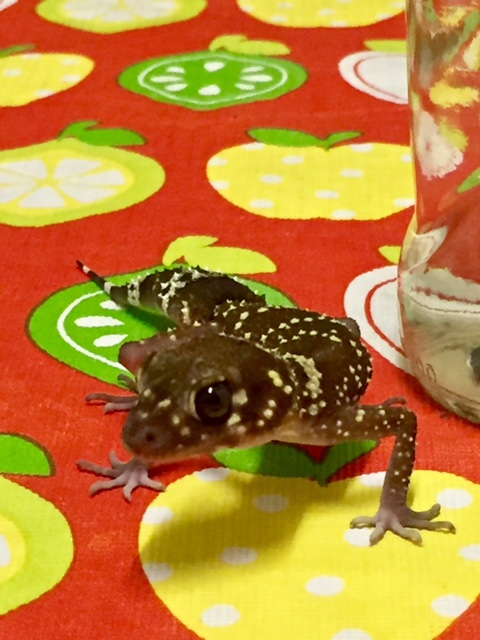 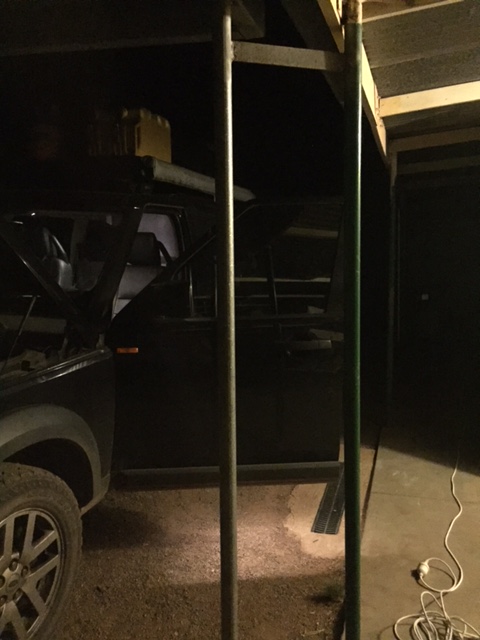 The next morning, after a sleepless night but with everything ready to go, I held my breath and turned the key in the ignition. Al, who is brilliantly practical, had bought a car battery charger along with us, and had plugged it into the power supply overnight. With the car battery charged up as much as the charger could muster, I turned the key and prayed. The engine sputtered…sputtered some more…and just when we thought it was going to die, it started up. I could have cried with relief. It was that battery’s last hurrah – it never started again, but it had worked that one last time.

It was Sunday and the garages were closed, so we decided to drive 300 kms, non-stop, to Port Augusta, where we phoned ahead to confirm we could buy a replacement battery from an auto store. We had enough diesel reserves (only just), and Al was quite confident the new battery would fix the problem, and would be easy enough to fit.

So off we went. En route, we talked to a lovely lady in the historic Outback town of Orroroo, south of the Flinders Ranges, and told her about our predicament. She agreed we could stay in her late grandmother’s cottage for the week, and yes, dog-friendly really should mean dog-friendly, and of course we could bring Bailey and Saffy indoors.

That night, as we settled into “Nana’s Cottage” in Orroroo, we were greeted by hundreds of corellas, which lined the street and the enclosed garden, where Bailey and Saffy were running around, enjoying their freedom. We felt incredibly lucky – as if we’d dodged a couple of bullets. We’d managed to escape a horrible situation at the sheep station, and at the same time, we’d avoided breaking down in the middle of nowhere, far, far away from help.

We unpacked and headed to the local pub, and funnily enough, that odd sense of foreboding that I’d been feeling for the past 24 hours completely disappeared. And yet, unknown to us, the next two days would turn out to be the most dangerous of our adventure so far. We might have dodged a couple of little bullets, but a much more dangerous situation was already brewing. As we walked back from the pub, we noticed that the normally clear heavens were bubbling with storm clouds, and a fierce rainbow was stretching across the sky.

(I know I promised I’d spill all the beans in this second part of “The Scorching Skies”, but I’m afraid I got carried away with my story-telling and now there’s going to have to be a third (final!) instalment. I’m sorry! But I promise this isn’t a hairy dog story – something serious does actually happen, but the crisis began silently, the next day). 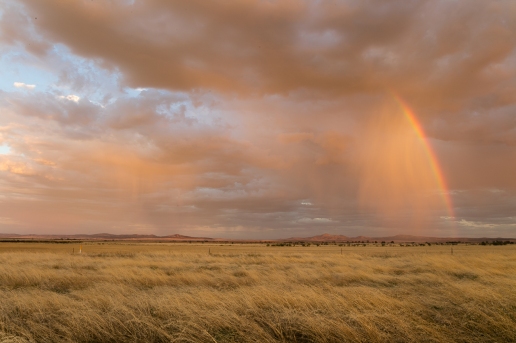 3 thoughts on “The Scorching Skies Above Us, Part 2”