We were expecting to wake up to a deluge, but despite the previous evening’s intense cloud lightning and rainbows, I don’t think a single drop of rain fell in the Flinders region that night. We awoke to a typically dry and dusty day, and as soon as I opened my eyes I knew it was going to be a scorcher. The sun was only just peeping above the horizon, and yet the bedroom’s ceiling fan was already circulating hot air. 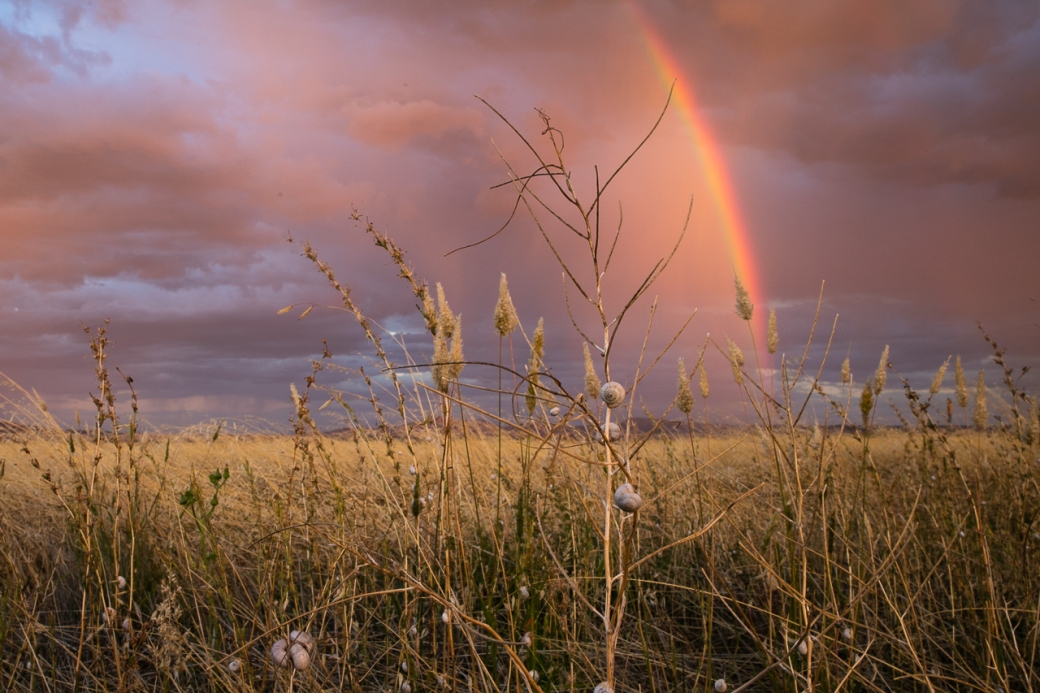 The sky had lit up the previous evening

As Al and I chatted over breakfast, we discovered we were both ready for another adventure. I know – if you’ve read “Scorching Skies, Part 2“, you’re probably wondering: what’s wrong with these two? After their experiences over the past 24 hours, why didn’t they just thank their lucky stars and stay put in Nana’s Cottage for the day? What’s wrong with a pub lunch and a leisurely walk with the dogs, for example? Well, both of us probably do have a bit of an adrenalin addiction, I admit it. But also, the stark beauty of the Flinders Ranges was still fresh in our minds, and although Orroroo was charming, we felt the wilderness calling us.

Our plan was to drive back up to Hawker, head into the Flinders Ranges National Park for the day, and return to Orroroo by sunset – about a 500km round trip, most of it in the sticks. We’d use the opportunity to scout out a good spot to camp later in the week, as we’d both been captivated by the clarity of the night sky up at the sheep station, and we were sure we’d be able to find an equally spectacular spot at the edge of the national park. It was far too hot for camping, but we thought it would work for one night if we set the tent up at dusk and packed it away at dawn.

So off we went. Only, we didn’t stick to our original plan. A few kilometres outside Orroroo we saw a sign post and a dirt track heading up to the Bendleby Ranges, an area of outstanding natural beauty, which was closer to us than Flinders. We’d never heard of Bendleby, but we liked the idea of exploring a new location, and saw no reason why we shouldn’t leave the longer Flinders trip for the next day.

The problem with the Bendleby Ranges, which we didn’t realise until it was too late, is that no one goes there in summer. Literally no one. It’s a completely isolated spot, where a few travellers will venture when there’s water around in winter and spring, but in the searing heat of the summer, when the creeks are dry, it’s deserted. What’s more, although the ranges are known for their excellent hiking tracks, we didn’t realise the off-roading there falls into the extreme category. 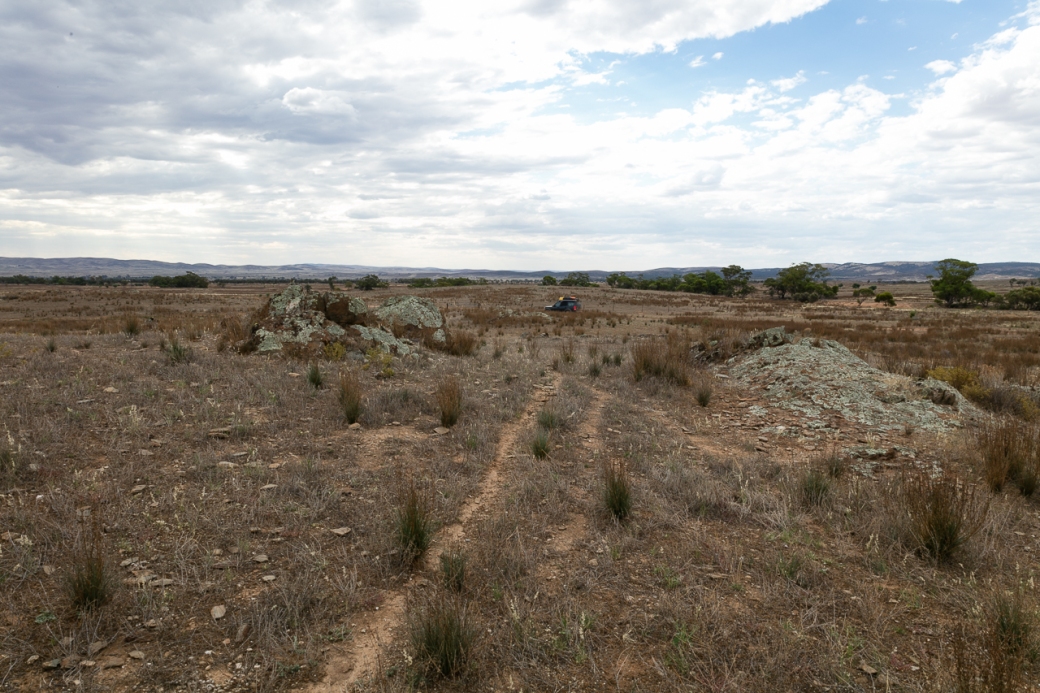 The landscape at the base of the Bendlebys. If only we’d known what lay ahead…

We should have realised that we were making a couple of basic but serious mistakes. First, despite having literally no knowledge of the area, we didn’t take a detailed, local map or talk to anyone about where we were planning to go or what we were planning to do. It was all very last minute and spontaneous. If you’re travelling in a single vehicle rather than a convoy in the summer months in the Outback, that’s a rookie error – the sort that can end up being reported in the news.

A couple of hours later, as we left the main access route and headed up into the Bendleby Ranges, the track quickly deteriorated into a steep and flinty gully, edged with thick bush and trees. It was much too narrow to turn around and too precarious to reverse, with sheer drops and sharp bends. We should have stopped, but we could see tyre marks ahead, and assumed that the track must be passable, and must surely improve or widen.

When the going gets tough off-road, Saffy always stands on all fours and looks pleadingly through the windscreen, Bailey lies down with his eyes closed and hopes it’s all a bad dream, and Al and I do what we can to reassure them. On this occasion, all four of us were sitting bolt upright and staring pleadingly at the insanely difficult track, which was gradually getting worse.

We couldn’t keep ploughing onwards, because the Land Rover seemed to be reaching its limits (which tells you something about how bad the track was). So, despite the intense heat, I did what we were advised to do on our 4WD training course: get out of the car, walk on ahead, see what we were in for, and then make an informed decision about whether to continue or risk a long and dangerous reversing manoeuvre.

My heart was pounding as I walked about 3km over tyre-piercing flints, desperately hoping that I’d find a way out for us. But the track was getting steeper. Then, just as I was starting to give up, I saw a clearing up ahead. It was the summit! And, to my huge relief, the track was wide and flat enough for us to turn safely.

I realised at that point that I’d been gone for a long time, and as I swung around to start retracing my steps, I went flying into a very worried Al, who had left Bailey and Saffy in the car (with the A/C running) and come looking for me.

“That’s a completely crap view,” he said, looking down from the top of the ridge. “Can you believe what we’ve just been through? For that?”

The view from the summit of the Bendleby Ranges, where we were able to turn around

It’s true, it wasn’t a great view, but he was joking, of course. We weren’t up there to appreciate the view!

We both felt stupid for having got ourselves into such a difficult situation, but at the time we didn’t realise the full extent of the danger we were in. A silent problem was developing underneath the car – one that wasn’t being picked up by its sophisticated electronics. The fact is, that while we were out there on that lonely track, our car was on the brink of a major mechanical failure. It was just a matter of extreme luck that we hadn’t broken down in a place where no one knew we’d headed to, no one would pass us by, and no one would be able to retrieve our broken car. We had no idea we’d dodged a missile. 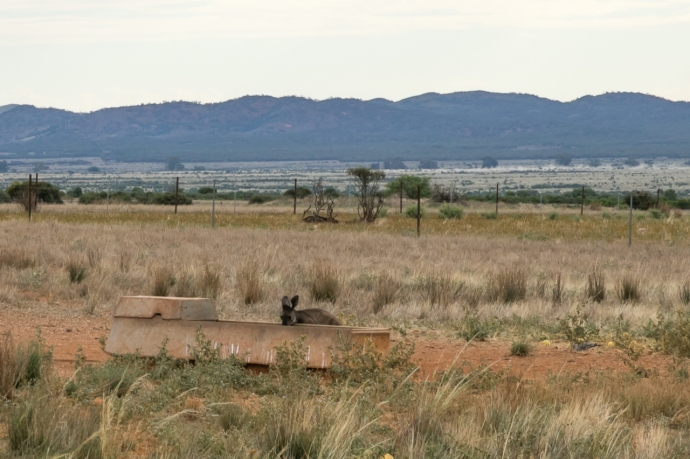 The next morning, when we set off for our longer expedition into the Flinders Ranges National Park, we were convinced the car was just fine. But a few hours into the journey (on a dusty track, but not far from a bitumen road) Al heard an unusual sound coming from the back wheels. It was a horrible grating and whining, which was worse when the car was moving slowly.

It was a weekday morning, and we were about 70 km from a small Outback settlement, where we were sure there would be a garage, so we decided to head straight there to get the noise checked out before driving into the wilderness. 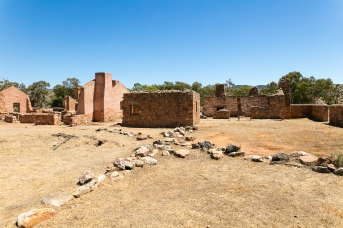 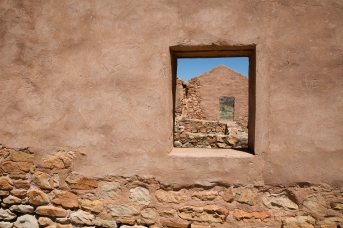 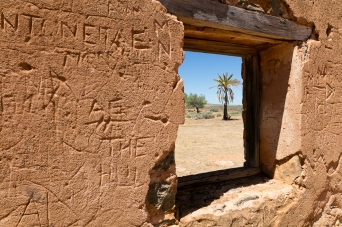 “That’s a stone, trapped in the wheel,” two friendly garage mechanics assured us. “We can sort that out for you, no worries.” They removed the back wheel and had a good look, but they couldn’t find the offending stone. Apparently, it wasn’t a problem though – it would eventually find its own way out; the noise was “a nuisance but not a safety issue”.

Only it wasn’t a trapped stone. They didn’t know that, and neither did we, but having got the reassurance we needed (probably the worst advice we’ve received…ever…anywhere…on any subject!), we left the garage and drove into the Flinders Ranges for a day of remote and breathtaking scenery. With a time bomb ticking under the car, we drove through gorges and across ridges, down dried up creek beds and over parched plateaux. It was stunning; one of the best experiences of our trip so far. 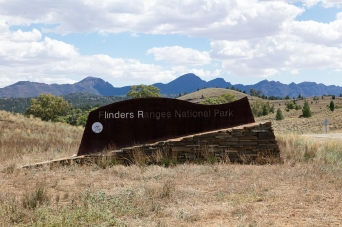 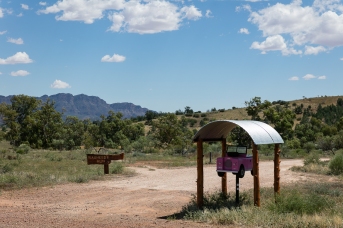 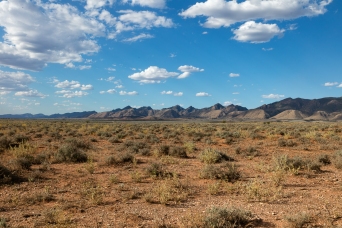 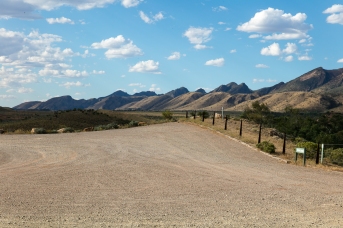 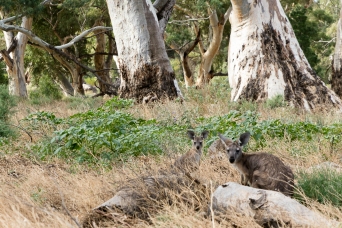 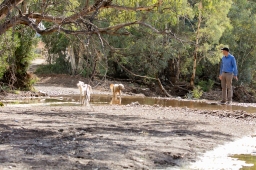 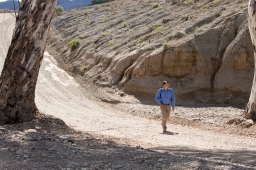 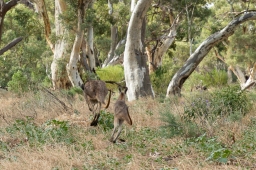 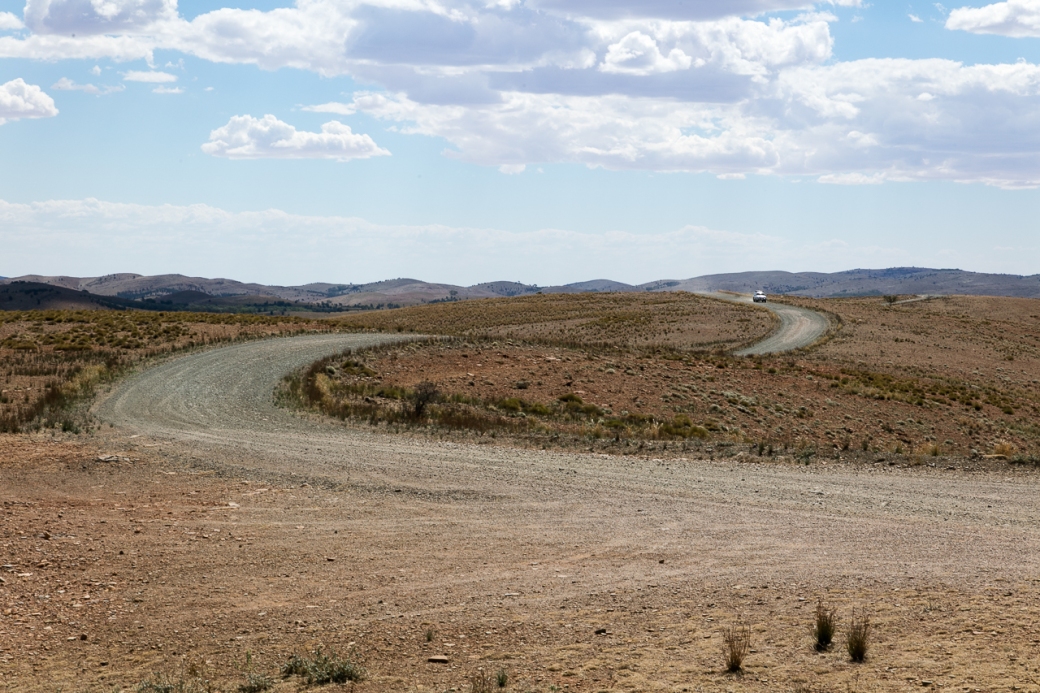 What’s that strange object in the distance? Wow, it’s another car (we saw two that day)

Our shiny car. This is a view of the ticking time bomb at the rear

Except the noise from the ‘trapped stone’ was getting louder.

To cut a long story short (just kidding – I’ve been spinning this out like a drama queen!), we limped back to Orroroo that night, and decided the next morning we’d have to take the car to an accredited Land Rover garage, just in case something sinister was going on. Unfortunately, the nearest one was in Adelaide, hundreds of kilometres to the south, but we felt we had no choice but to head there. I could tell Al was seriously worried. He’d gone quiet, and he was very insistent that we should leave before dawn and try to reach Jamestown, a reasonably large town (about 90km south of Orroroo) before the heat of the day. He didn’t tell me at the time, but he was convinced that was as far as we would get before the Land Rover died.

Well, I think Al must be psychic, because as we entered Jamestown, just after sunrise, the car’s steering suddenly failed, sparks started flying out of the back of the car, and the Landy did indeed sadly perish by the side of the road. The back wheel bearing (which holds the wheel on) had completely disintegrated (probably under the weight of our survival kit), and the brake discs had bent. Thankfully, we’d only been doing about 30km an hour, on a flat and quiet road, and help was soon at hand.

Annoying and inconvenient? Um, yes – we had to get transported all the way to Adelaide and lost the use of the car for an entire week. Scary? A bit, but not as scary as the tow truck driver, who ate his pie with one hand, drank his chocolate milk with the other, and drove with his knees. Pampers, anyone?). Expensive? You bet – the cost of getting the Landy fixed would make your eyes water. But lucky? Yes, you could say we were two of the luckiest people in Australia that day, and on the previous couple of days, too. Other than learning the relevant lessons, it’s probably best not to think about it too hard, or we wouldn’t cross the notorious Nullarbor, which we’re due to tackle in a couple of weeks. 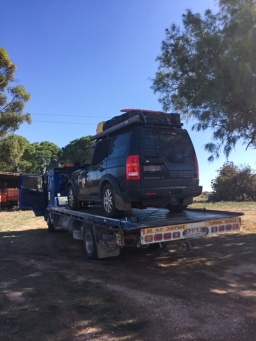 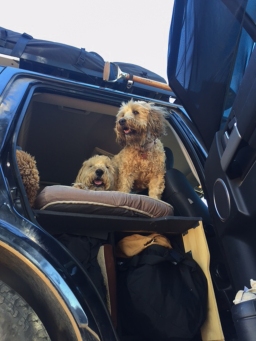 2 thoughts on “The Scorching Skies Above Us, Part 3”