It’s 2am, and deep in the dunes at the eastern end of the Nullarbor, a lone tent is being battered by howling winds and drifting sand. It’s been pitched to face a dramatic view of the Great Australian Bight, a vast stretch of sand dunes and limestone cliffs that link South and Western Australia. But what looked so beautiful and enticing in the daylight is transformed by the night: inside the tent, Al and I and our two dogs, Bailey and Saffy, are wide awake in the darkness, listening to massive breakers boom and hiss.

Jaxson’s Beach at low tide (photograph taken from our camp site, before the gale began)

“This is the first time I’ve camped in a gale,” I say, laughing nervously. My arms are wrapped around Bailey, who has been cuddling up to me for hours. “Are we going to blow away?”

Al shrugs. “If the guy ropes start snapping, we’ll get in the car,” he says. He sounds like he’s taking it in his stride, but I can tell from his body language that he’s preparing for a speedy evacuation.

My mind flashes back to earlier in the afternoon, to when we arrived at our remote and spectacular camping spot, Jaxson’s Beach. We’d accessed the area  – which is on Aboriginal land – via a 90-minute off-road drive down a flinty track south of the Eyre Highway (a 1200 km road that crosses the Nullarbor). The drive had become progressively more difficult as we approached the coast, but we’d managed to keep going until we reached the final part of the track, which ended high up in the sand dunes, at our camp site. We’d tried to scale the steep, soft, deeply-rutted track several times, until various mysterious warning lights lit up on the dash board. At that point, rather than risk another break down, we’d decided to unload and drag our heavy camping equipment up to the camp on foot – a back-breaking, 500-metre haul that turned out to be worth the effort, because with the heavy gear out, we’d been able to drive the car up. It’d felt like a major victory, until we’d begun pitching our tent and noticed the site was littered with frayed and broken guy ropes. 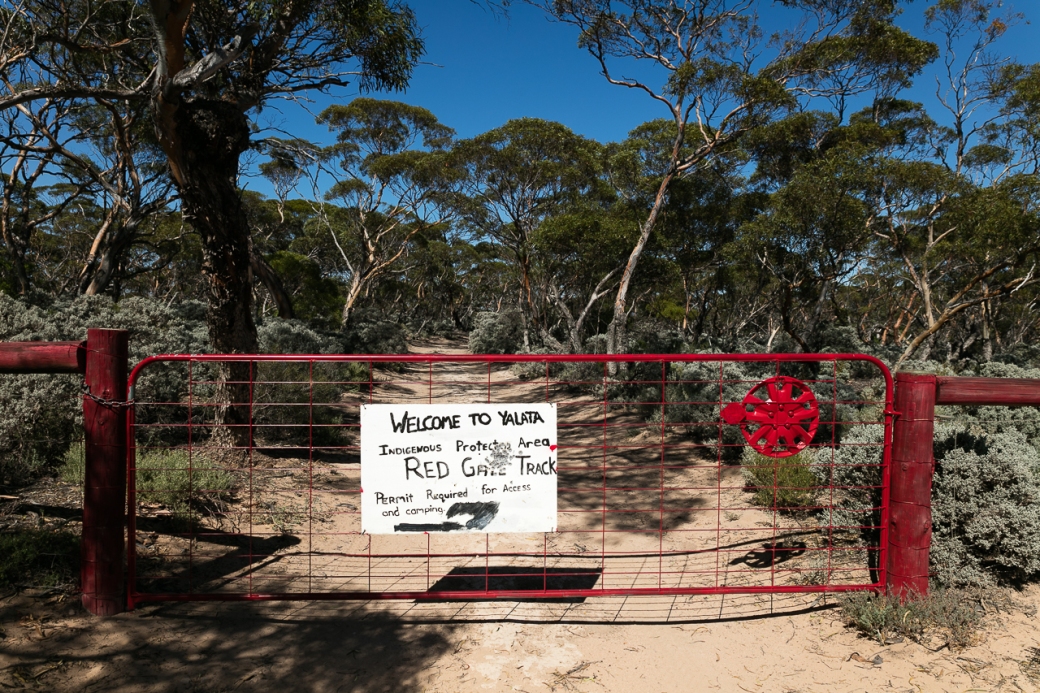 Red Gate Track, which leads to some wild coastline and deserted camp sites 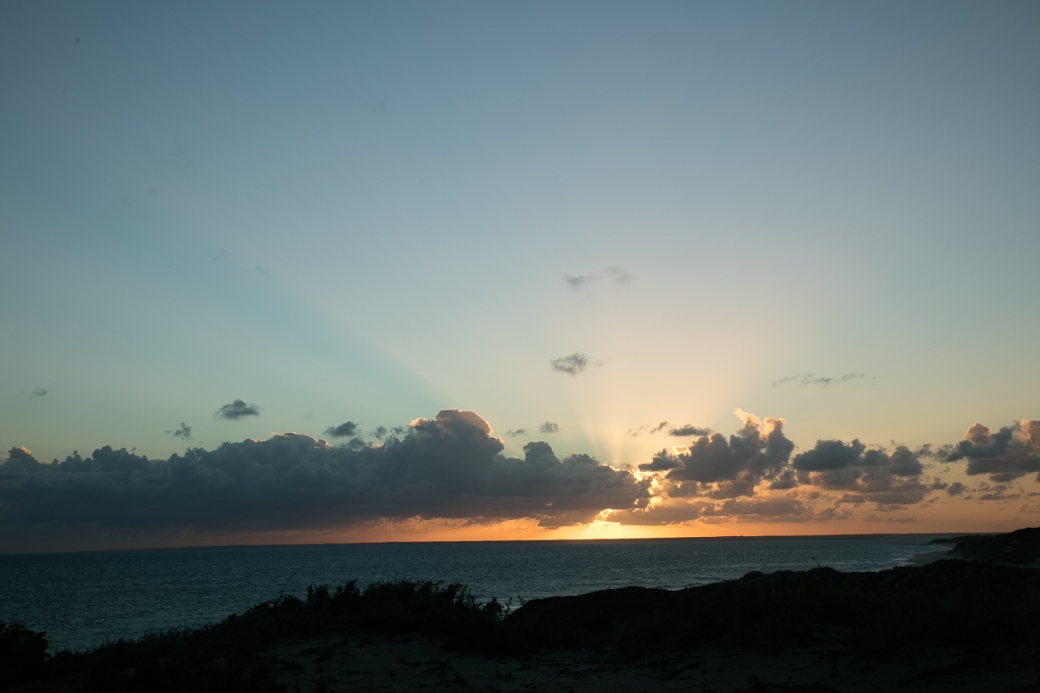 Sunset at Jaxson’s Beach. We climbed the highest dune and ate dinner while the sun went down

I’m thinking about that array of brightly coloured ropes as the sides of our tent whip and smack around us, and the thunderous surf crashes into the dunes below.

“If it wasn’t for the fly sheet, we’d probably be surfing in our tent by now,” Al says. “It’s taking the full force. It’ll hold up, I think. Glad I added the extra ropes though.”

“Yeah,” I say, holding Bailey a bit too tight. “Are you sure you’ve never been in the SAS?”

Al eating a delicious curry, which he prepared on a camp stove in the wilderness. Is that normal? 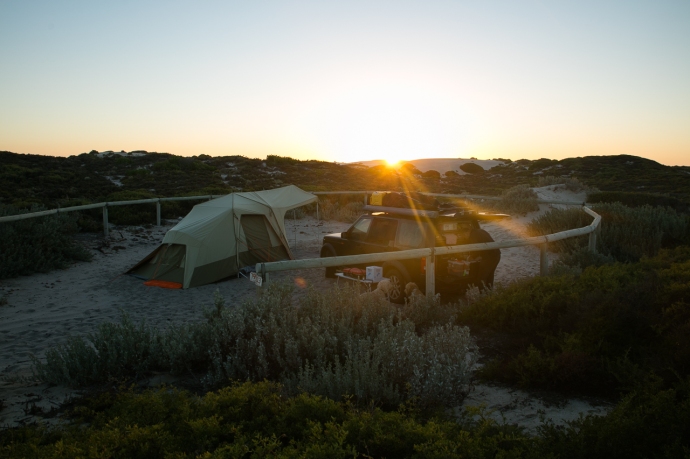 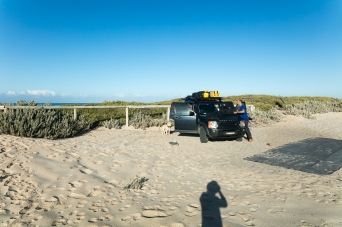 At about 4am, when the wind starts to drop and I realise we’re going to make it through the night, I notice my sleeping bag is full of sand. It’s between my toes and stuck to my calves, and when I stretch my feet down to the end of my bag, I can feel a handful of it kicking around. “Are you still awake?” I ask.

“My sleeping bag’s full of sand.”

“Mine too. But on the bright side, at least it’s not mud.”

“Um…we’re in the desert? When’ve you ever had mud in your sleeping bag?”

“Just sayin’ we should look on the bright side, that’s all.”

“Yeah, on the bright side, I’m getting a free exfoliation in the middle of fricking nowhere on the Nullarbor. I’m one lucky, lucky lady…”

The next morning, as we’re packing up our tent and preparing for a long day on the road, I watch Al loading up the car, jumping on and off the roof, and preparing breakfast, all at the same time. Who are you really, I ponder, as he hurls our 40kg tent into the roof bag. What dark secrets have you been keeping from me about your life in the special forces? Have you been moonlighting the whole time we’ve been married, or were you doing special assignments before we met?

Later that day, Al’s tooth, which has been twinging for a couple of days, flares up with serious pain. We’re days from the nearest dentist, and although we’ve got some painkillers with us, they’re just Panadol and Neurofen – nothing strong enough to deal with a tooth infection. He’s being extremely brave about it, of course, which I take as more evidence of his secret life. “Are you going to remove it with pliers?” I ask.

He gives me a strange look.

“You know, like you do in the SAS,” I say. (I say it under my breath this time, in case he’s worried I’m onto him and his cover is blown).

When we reach the next roadhouse on the Eyre Highway, he calls a dentist in the nearest town, Esperance, some 900km away, and books the first appointment he can get. It’s in two days time. That’s a bit soft, I think to myself. But SAS folk probably do use the dentist – when they’re in Australia, not deep in the Borneo jungle. That makes sense. But what about his vegetarianism? And his hat-wearing dog? What do his SAS buddies think of that? I guess they must overlook it…

Anyhow, we’re back on the highway, doing some very loud car karaoke (karaoke + bad toothache = not normal…more evidence), when we notice a group of people waving at the side of the road, with their sticker-covered luggage nearby. To grasp how odd this sight is, you need to understand that the Nullarbor is a very unforgiving environment. It’s a huge, treeless desert, where few animals live, let alone humans. Before people cross it, they plan their journey to the nth degree, taking enough food, water, and supplies to survive a short war. And yet here is this group of people standing in the hot and dusty middle of nowhere, with their suitcases beside them, looking like they’re flagging down a Manhattan taxi.

“What on earth are they doing?” I say, as we head towards them.

“I guess they’ve got car trouble,” Al replies. “I’ll pull over and see if we can help.”

There’s no car in sight. And there’re four of them and two of us. I’m immediately suspicious and wonder if instead of stopping, we should head to the next roadhouse and send help from there. I suggest this to Al.

“We can’t do that,” Al replies. “It’s hours from here. What if someone’s injured? Or they’ve run out of water?”

So we pull over, and Al jumps out. Just at that moment, a car, which had been hiding in the bushes well back from the road, starts up its engine and creeps forward.

I’m thinking: this is seriously dodgy and it isn’t going to end well. I’m also thinking: Al might need to use his SAS moves here. But can he take on four people at once after a sleepless night and with full-on toothache? I stay in the car, pleased that Bailey and Saffy are bouncing around, woofing, sounding much bigger than they are, and also surprisingly ferocious for two fluffy Wheatens. My mind is racing through the options if things turn nasty. Al has left the keys in the ignition and the engine running, so I’m wondering if I should jump into the driver’s seat.

Al comes back to the car. “Can you flick the bonnet switch?” he asks. “They’ve totally wrecked one of their tyres, and their spare needs more air. We’ll use our compressor.”

Everyone smiles with relief.

While Al fixes up their tyre, I offer the group food and water, and try to find out more about them. It turns out they’re from Taiwan, and they’re visiting Australia on working visas. Their English is limited, so I can’t determine how long they’ve been stranded by the road or why their car was in the bushes. It’s a mystery.

…but not as big a mystery as Al’s past. Seriously, how many people would have the confidence to stop and help in that situation, especially after watching Wolf Creek? 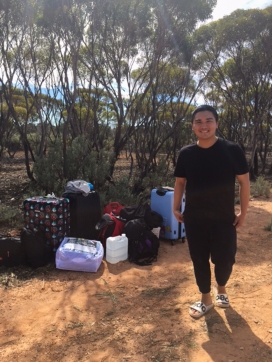 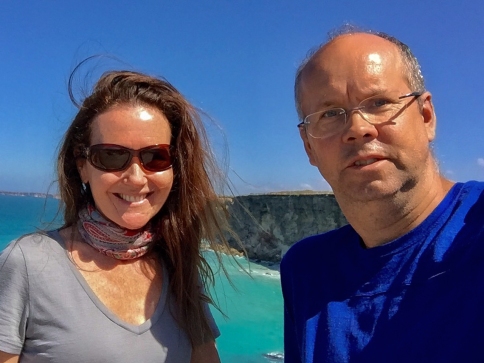 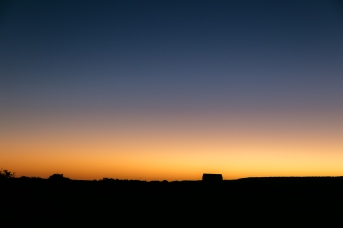 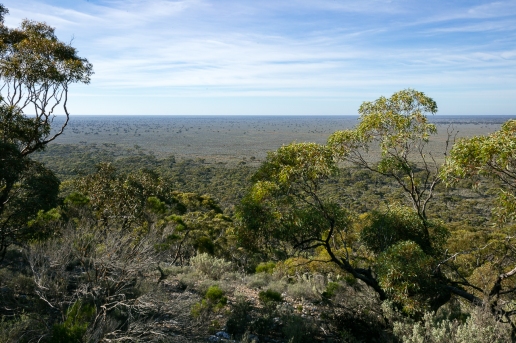 Not many is the answer. A couple of days later, I’m in Esperance, photographing a lake at sunset, when two groups of ‘Grey Nomads’ turn up (retired Aussies who travel around the country in campervans, often in convoys). They start chatting about their journeys across the Nullarbor, and one of them says: “We saw the oddest thing – a bunch of fellas at the roadside. Looked like they were waiting for a bus! They waved to us, but we didn’t dare stop…didn’t look right.” Another man says: “We saw them, too! Bizarre! What the hell were they doing? I wonder what happened to them?” 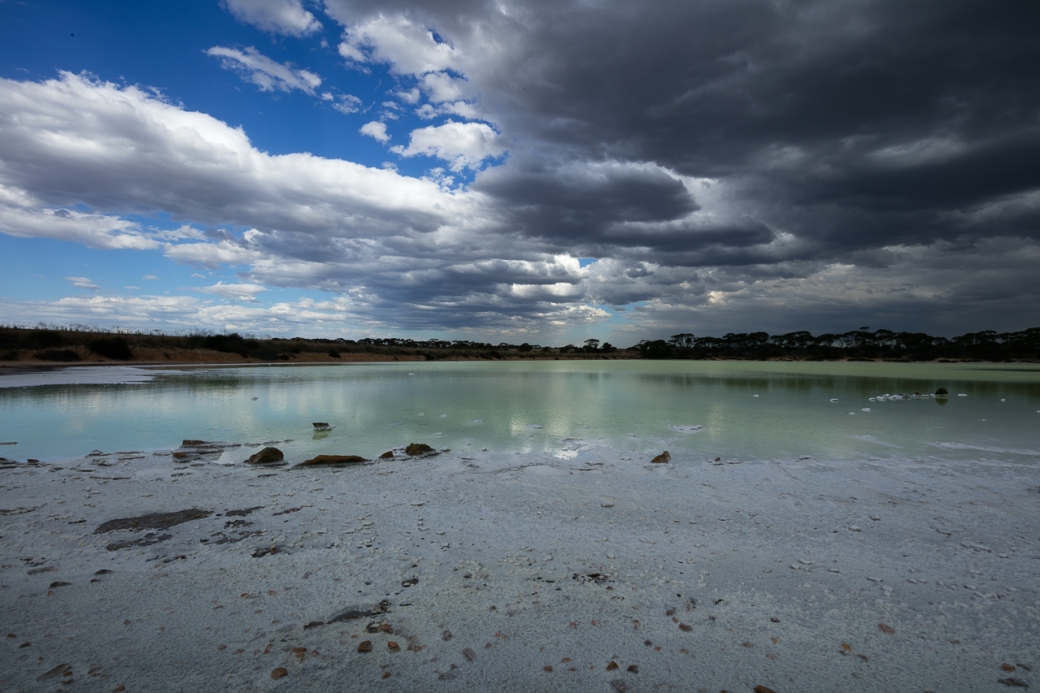 The lime green lake near Grass Patch, on the drive into beautiful Esperance, WA 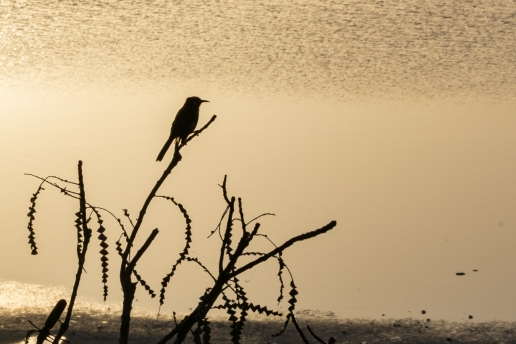 I turn around. “They had a flat tyre, and their spare was leaking,” I say. “They needed help fixing it up.”

They all look at me. “Are you serious?” one guy asks. “You stopped? Could’ve been ambushed!”

“It did look weird,” I admit. “But my husband insisted on helping.”

“He is,” I smile. I nearly add that his SAS training came in handy, but decide to keep that to myself.

As I’m driving back to our accommodation, I reflect on how amazing our Australian adventure has been, and how, if I’d known what we were getting ourselves into, I’d probably never have left Sydney. I’ve been so far out of my comfort zone, and at times I’ve even been scared, and yet I wouldn’t change anything. Life is full of risks, and it’s so much more fun if you take them. And others benefit too if – even when you’re feeling totally out of your depth – you look on the bright side, assume the best outcome, and help them out.

Some more photos of lovely Esperance, which is a breath of fresh air at the end of the Nullarbor. It has the whitest beaches and wildest seas we’ve ever seen. 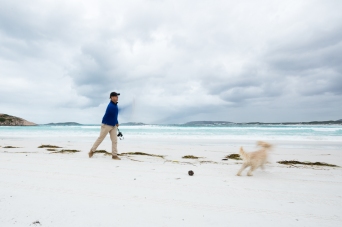 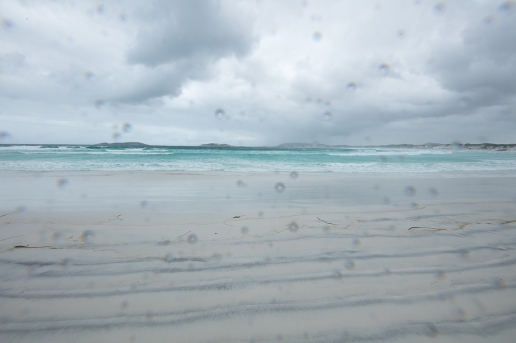 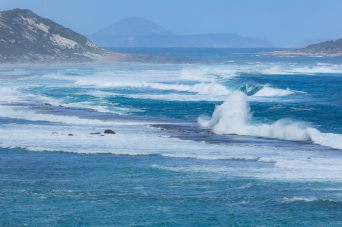 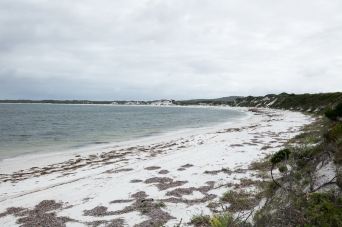 3 thoughts on “The Bright Side of the Nullarbor”